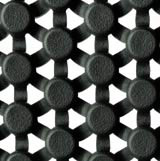 First impressions of last month’s Neocon office furniture fair in Chicago were that it could have been any one of the shows from the past five years. But those first impressions were misleading.

Although based around permanent showrooms of largely American contract furniture manufacturers, vacant floor space in the colossal Merchandise Mart building has been used for temporary exhibits, with an additional 4600m2 this year. In effect, this has created two shows, as the atmosphere, environment and quality of presentation is vastly different between permanent showroom and temporary stand. The benefit, however, is that it allows European companies – as well as other manufacturers throughout the world – to attend, helping to serve a healthy interest in European design, as well as helping those that dare to establish a foothold in the US market.

A growing number of US companies favour office furniture designed by Europeans. Davis Furniture Industries, for example, has licensed Renz in the US for many years. It has also worked with European designers – for instance, with Wolfgang Mezger on a new range of reception seating, called Radius. Davis also showed work from Philipp Haselwander, a student of the University of Graz in Austria. Known as Compod, it features three casual seating elements and a pull-up tablet, to create freedom to work by being casual, comfortable and spontaneous.

Other European and, in particular, British products were also represented. Allemuir exhibited again this year, and its parent company Senator had Trillipse and Aura stacking chairs on show through its US licensee – Lay-z-boy. And out of 68 Neocon awards given, Sandler Seating’s Ibis chair won an Innovation award for the use of Hirek recycled resin, and Colebrook Bosson Saunders won a silver and gold for Lapjack and Loop respectively.

Because the emphasis has continued to move away from the development of large-scale systems, differences over previous years weren’t immediately noticeable. Except for a low-key display by Steelcase of Duo, designed by Ideo and shown as prototypes last year, the focus on the immediate workstation has moved on to peripherals, ergonomic enhancements and the internal architecture of the workplace as a whole.

On that theme, Haworth showed its Enclosure walls and Compose panels programme, which creates a link between furniture and interior architecture. This is not conventional partitioning, but a flexible system with lots of useful features to contain and divide space, or use as display or storage.

Addressing privacy in open-plan offices, Herman Miller launched Babble, the first product from its Sonare Technologies division. Unlike white noise, Babble scrambles the sound of your voice and transmits it through a speaker. The same size as a portable radio, Babble plugs into your phone and operates automatically, so it is unobtrusive for the user.

Care for the environment and ‘cradle to cradle’ life-cycle-management featured throughout the event, becoming the mantra of many companies, with some claiming that recycled materials make up more than 50 per cent of their products. Furthermore, many manufacturers claim that all of the materials used in the manufacture of their products will be recyclable by the end of their life.

Unlike the US Government, the country’s manufacturers, designers and architects are committed to sustainability, introducing new codes such as Leadership in Energy and Environmental Design. This protocol awards credits to a project for its low environmental impact. Each component and material specified must comply. Therefore, the commercial penalties of Leed are being taken seriously in the development of products used in construction and interiors.

But apart from addressing compliance of existing products, environmental concern is also driving materials innovation. ICF’s Imprint seating range uses a compressed wood pulp for the seat shell, although the most elegant eco-chair came from Metro (a Steelcase company).

Consisting of a lounge chair and two side chairs, the Poly Seating collection uses a pulp made from recycled drink bottles, Polyethylene Terephthalate. Although textile companies have used this material for some time, Metro’s design team has produced a very simple and elegant lounge chair out of two formed shells. The stiff outer shell is felted and impregnated, while the inner upholstered shell is woven. The two pieces are glued together and supported by a simple frame; the whole chair can be easily dismantled for recycling.

Herman Miller, Haworth and Knoll all launched new task chairs and Humanscale launched a side chair to complement the successful Liberty task chair. Humanscale, Haworth and Knoll favoured the use of mesh. But continuing its innovative, egalitarian approach, Herman Miller launched Cella, designed by Jerome Caruso. The moulded seat and back, or ‘cellular suspension system’, is made up of hundreds of discs and loops, designed to flex progressively, massaging your back, much like those bead seats favoured by minicab drivers. Tooling costs may deter imitators, but the result of this serious investment is a very competitive product, with prices expected to be considerably below the company’s Aeron and Mirra chairs.

For many years the system furniture industry, compared to others, has lagged behind in the use of sophisticated technology and for the bulk of manufacturers that is still the case. Past Neocon fairs have been characterised by bold ideas, using essentially simple pieces of furniture to create concept systems and new workplace solutions. Where the major companies used to make a splash with a big eye-catching installation, at this year’s Neocon the approach was subtle and ‘smart’ and you had to dig a little deeper to discover it. First impressions can be misleading!

Barry Jenkins is director of BroomeJenkins