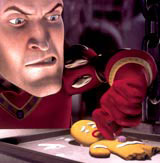 After the sublime Toy Story 2, I doubt if anyone outside the film industry expected computer-generated animation to achieve anything better. Wrong. The £40m Shrek, five years in the making, takes computer-generated imagery on to a higher level of virtual reality altogether.

For the DreamWorks Pictures film, PDI/ DreamWorks’ feature animation division, which produced the ground-breaking Antz in 1997, developed a whole new system of facial and bodily animation to give its fairy-tale characters greater credibility.

Using innovative software, known as shapers, the animators were able to achieve sophisticated facial and body movements by applying interacting layers of bone, muscle, skin, hair, clothing and, in the case of Donkey (voiced by Eddie Murphy), fur. They also filmed the voice-over stars – principally Mike Myers, Cameron Diaz, John Lithgow and Murphy – in the recording studio so that the PDI animators could then match the actors’ facial movements to the characters they portrayed.

In this ingenious and often irreverent parody of early Disney films, Myers is the smelly, swamp-dwelling ogre of the title who finds himself entrusted with the care of a load of unwanted fairy-tale characters, such as Cinderella, Pinocchio, Snow White and the Seven Dwarfs, the Three Little Pigs and so on, who have been chucked out of fairyland by the evil Lord Farquaad (voiced by Lithgow).

The fact that Farquaad lives in an archetypal Disney World castle and bears more than a passing resemblance to Disney boss Michael Eisner is seen by some film writers as significant, since Shrek’s executive producer, Jeffrey Katzenberg, the man behind The Lion King and Beauty and the Beast, was effectively turfed out of his top job at Disney by, you guessed it, Eisner. Katzenberg went on to form DreamWorks with Steven Spielberg and David Geffen.

None of that is particularly relevant to the creative achievements of Shrek, but perhaps it does provide a clue as to the mischievous humour of the narrative, which won’t escape anyone familiar with Disney’s back catalogue.

“Basically, we took every fairy-tale and turned it on its side,” says producer Aron Warner. “These characters are ripe for parody nothing is sacred.”

But the remarkable thing about Shrek is that it manages to create its own magical, fairytale world at the same time as sending up the whole Disney ethos rotten. It somehow bridges the gap between animation and live action, fantasy and reality.

In contrast, Lord Farquaad’s kingdom of Duloc is angular, linear, cool, a far more controlled and orderly space than Shrek’s swamp, where the dirt moves and the dust rolls.

The heroine, Princess Fiona, voiced by Diaz, finds herself caught between these opposing worlds. Shrek and his companion Donkey first come upon Fiona in a castle where she is being held captive by a fire-breathing dragon. To get to the castle, Shrek and Donkey must first cross a rickety rope bridge over molten lava, which presented some challenges to the layout team, headed by Simon J Smith, a chirpy Londoner who has been with the California-based PDI since 1997.

The equivalent of cinematography in live action film, layout is the first step of turning 2D storyboards into 3D images by camera-blocking each scene on the computer.

For the bridge-crossing scene, Smith set about taking the audience with the intrepid duo across the rope bridge, thus heightening tension. Once inside the castle, Shrek and Donkey slay the dragon, rescue the princess and make their escape in an action sequence involving dozens of quick cuts.

One of the major problems that Smith faced was the varying sizes of the principal characters in Shrek.

“Whereas in Antz, all the main characters were roughly the same size, these guys could not be more disparate in terms of size and shape,” he says. “You have Shrek who is huge, Fiona who is small and lithe, and the short, squat Donkey, so it was sometimes difficult to find the right camera angles to suit everyone.”

He would often resort to the digital equivalent of standing an actor on a box (or in a trench) in order to balance the composition of a shot. Paradoxically, one of Smith’s jobs was to ensure that it didn’t look “too computery”, so that audiences would not be overly aware of the technical mastery.

Proud as he is of Shrek’s digital advances, Smith would prefer the audience to remain ignorant of them. His aim is to emulate real camera moves on the computer. “In my job I get to play at being different directors,” he says. “A bit of Butch Cassidy here, a touch of Star Wars there. All film-makers plagiarise, even Spielberg. In one sequence, the dragon is chasing Donkey. I used a Martin Scorsese trick for that scene because it doubled the energy of the shot.

“It helps being a movie buff with a good memory. In a sense digital is limitless, but that also carries its own danger because if you’re not careful you can end up with a beautiful-looking film that doesn’t mean anything emotionally. The story should always be the most important thing. And you’ll always need performances, even if it’s just the voices, as in Shrek. I’d hate to think that computer-generated imagery was going to replace actors altogether.”

The sophistication of the human animation in Shrek has led some critics to observe – as well as the actors involved – that computergenerated imagery may eclipse real-life actors in the near future.

Both Murphy and Diaz were unnerved by the accuracy of lip-synching and the expressiveness of their on-screen counterparts. “If this is the future then perhaps they don’t need actors,” Diaz is reported to have said after seeing a rough-cut.

The techniques used to animate faces were also applied to the whole body structure, as well as clothing and natural elements, such as trees and grass. Even though these processes were technically painstaking, many still required a palpable human touch. In one scene, for instance, Shrek takes a mudbath. “We took one of the guys from the team, put him in a yellow slicker and dumped mud all over him,” recalls Ken Bielenberg, head of visual effects. “Besides being fun, it gave us a good reference to see how mud behaves.”

One of the great advantages of digital animation is the ease with which it is possible to organise crowd scenes. The Mill, a London-based computer-generated imagery company, won an Oscar in March for its work on Gladiator, notably for increasing spectator scenes from a few hundred real-life extras to serried ranks of thousands.

Similarly, in Shrek there are more than 1000 spectators in the tournament scene and a further 1500 in the climactic wedding scene.

For these, a digital doll’s house was created, with assorted heads, body types, faces, hair and clothes that could be combined for a selection of some 450 characters. Multiplying them all together, there were tens of thousands of possible permutations for scenes involving extras.

“If you have the time and the money, computer-generated imagery enables you to make things look seamless, in live action as well as animation,” according to Smith. “Nobody would have known that extras in Gladiator were simulated, and whoever would have guessed the jeep which flew off the edge of a cliff in Jurassic Park was computer-generated?”

Katzenberg is excited by the idea that, with digital animation, you can make your wildest dreams come true – on-screen at least. But he is realistic about the rapid developments taking place in the industry.

Shrek is released nationwide on 29 June

The facial animation software developed for Shrek enabled the creative team to express complex emotions and reactions through a layering system based on human anatomy. The skull of a character was formed in the computer, then covered with computer simulations of the face muscles. The skin is then layered over and programmed to respond to the manipulations of the muscles, as a human face would, complete with wrinkles and other imperfections. Then 180 animation controls are wired into the face, like nerves, to enable the animators to achieve precise lip-synching and access a range of expressions as varied as for any human actor.

However, with facial sizes and characteristics as diverse as those of Shrek, Donkey and Princess Fiona, adjustments had to be made to find the desired expressions for each character. One of the most striking things about Princess Fiona is the realistic quality of her skin. A special program called a shader was developed just for Fiona’s skin, which enabled the lighting technicians to layer her skin with light, giving it the translucent quality of real skin. Apparently, she became so lifelike that the directors of the film modified the process, fearing she would look out of place in an animated feature. No wonder Cameron Diaz sounded worried.