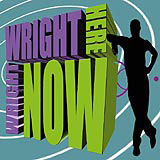 Created and directed by designer Ant Fisher, the titles had to reflect Wright’s sense of fun and his lively personality, Fisher says. The titles incorporate cartoon sequences based on Wright’s figure, which is silhouetted against a blue backdrop and interacts with the type on screen.

The original storyboards were created by BBC MediaArc designer Paul Baguley with matte paintings by designer Richard Acton. The show is a mix of live music, games and chat.