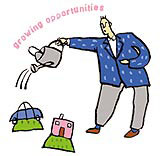 DNA Consulting has created an intranet for Shell Consumer, a division of the multinational that develops new consumer products and services in the home energy, technology and automobile markets.

DNA Consulting creative director Steve Thompson says, ‘The brief was to inspire people to be passionate about consumers. In coming up with ideas for consumer-led products, Shell Consumer staff are encouraged to do things differently and we were conscious of that in approaching the design.’

The DNA team had to work within Shell’s design guidelines, but illustration was used to develop a ‘visual point of difference’ that would stand out, says Thompson. ‘We tried to push the guidelines as much as we could, with the aim of creating an instant form of communication,’ he adds.

Illustrator George Onions was commissioned by the group to create ‘a number of characters’, which have been used on every page of the site.

Designer Alex Gray worked on the project alongside Thompson. The budget is believed to be around £50 000, although this does not represent the group’s fee. DNA Consulting was appointed to the project after a creative pitch in November 2001.