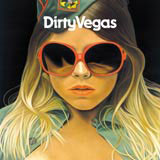 Music graphics specialist Blue Source has achieved the giddy heights of record design known to only a few. And still the consultancy’s recent cover work with house music band Dirty Vegas is so striking and fresh it demands attention.

Featuring the photorealist artwork of American artist Richard Phillips, Simon Earith and the team at Blue Source have designed and art directed an unmissable series of 1970s-inspired sleeve, poster and flyer designs, which like all great records, are pleasing to own just for their own sake.

This is the first time Phillips has allowed his work to be used by any band. Paul Harris, Steve Smith and Ben Harris formed Dirty Vegas early last year and released the single Days Go By and Ghosts through Parlophone.The album was released on 5 August.

Phillips’ ‘big, flat, simple and empty’ creations, as they have been referred to in the art world, are in perfect keeping with the times. The lush close-up portraits are funky, yet somehow seem a little sinister.