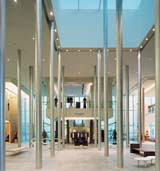 Battersea Power Station developer Parkview International has struck a deal with Sheikh Majed Al-Sabah to bring his luxury fashion store Villa Moda to the West for the first time.

Designers are yet to be appointed to create the three-storey, 5000m2 Villa Moda London store, which is scheduled to open in spring 2009 inside the power station’s Art Deco Turbine Hall A.

Villa Moda Dubai, the second of Al-Sabah’s three stores, was designed by the then creative director Jean-Phillipe Evrot (DW 4 December 2003), but a spokeswoman for Villa Moda confirms he will not be working on the London store. It is likely that the Villa Moda design team will work closely with HMKM, lead retail consultancy for the Battersea Power Station scheme, to ensure there is a ‘harmony’ between the elements, according to Parkview director of corporate communications Ian Rumgay.