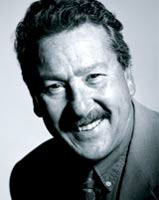 ‘Minale Tattersfield was where David Turner and I met, where we planned what eventually became Turner Duckworth. David was there from 1984-1988 and I overlapped from 1985-1988. So Minale Tattersfield had a lot to do with our company and Marcello was always interested in his “boys” and how we were doing. We still regard Marcello as a kind of father figure for the company.’

‘I joined Minale Tattersfield in 1987 as a junior designer and left as a senior designer in 1995. I went on to join DMB&B Financial as a senior designer, progressed to head of design and then, in 1999, I was promoted to design director. The company is now called Masius – an integrated communications agency, dedicated to corporate, financial and business markets. We are part of the global Bcom3 network.’

‘I was at Minale Tattersfield between 1983 and 1991 as a 3D designer working on everything from structural packaging for automotive, wines and spirits, to work on foods, retail interiors, furniture, product design, signage display, exhibition and environmental design.

Minale Tattersfield gave me a superb grounding on everything three-dimensional, and Marcello put me personally in charge of changing the light bulbs! I will remember Marcello with huge affection and respect.

In 1991 I formed structural packaging group AM Associates with my wife Laurel Miller. We now work with many of the UK’s leading graphic designers and also for clients such as Boots the Chemists, Halfords, Marks & Spencer and Hasbro.’

‘I am the senior creative at brand packaging specialist Hurricane Design Consultants in Oxfordshire.

I joined Minale Tattersfield in 1989 after leaving the Royal College of Art and worked closely with Marcello as part of his packaging team for five years. There I met my wife Elizabeth Knight, who worked at Minale Tattersfield for ten years. After a stint at Ziggurat, I started at Hurricane in 1997.

Marcello was our friend and we are still reeling from the events of the last few weeks. Lizzie and myself have been recounting dozens of stories about Marcello, many of them very funny. But the story which touches us happened just after our first daughter was born.

Lizzie was still recovering in the maternity ward at St.Mary’s Hospital in Roehampton. She was dozing when who should put his head around the curtain but Marcello. It was clearly not visitors time, but somehow he had managed to blag/ charm his way past the stoney-faced midwives with a story about travelling hundreds of miles to be here, just so he could see the new-born of two of his designers. How many design legends would be prepared to do that?’

‘Marcello gave me my first job as junior designer after I left the London College of Printing in 1983. In 1985 I moved on to The Partners.

In 1988 I moved again with Brigid McMullen (fellow designer at The Partners) to help set up the corporate design division of Dewe Rogerson (as joint creative directors).

In 1990 I left Dewe Rogerson to set up The Workroom (again, with Brigid McMullen).

Although I spent a relatively short time at Minale Tattersfield, I enjoyed it enormously and couldn’t have asked for a better start in the design industry.’

‘Marcello gave me my first real job as a designer after I left the Royal College of Art around 1979. I was working primarily on the refurbishment of the Northern Line; a first taste of the real pleasures of working on public projects.

It was a truly inspiring, defining experience. Marcello was, of course, extraordinary, but the real magic was the environment created by the chemical reaction between Marcello and Brian Tattersfield. The design process was a passionate, cross-disciplinary family affair – huge fun with everyone sitting around a big table.

I left after two years; spent a short time in other studios trying to find the same pleasures and then recreated them for myself by establishing Simpson Molloy with Graham Simpson, another Minale Tattersfield old boy.’

‘Regarding Marcello, where does anyone who worked with him begin? He was a huge influence. When I left the Royal College of Art to work with him it seemed like an extension of college – the atmosphere was so free-thinking and relaxed.

However, he was never happy to sit back on Minale Tattersfield’s laurels, and personally took great pleasure in nurturing each year’s crop of college graduates. His unbounded enthusiasm for all things in design and life in general proved to be an infectious mix for any newcomer.

Although blessed with more than his own fair share of Latin temperament, his greatest human quality to me was his over-riding sense of fun. Be it his approach to design, his love of being outspoken (he was never one to sit on the fence), sport or being the butt of innumerable practical jokes in my four years at Minale Tattersfield, his sense of humour, though severely tested, never deserted him.

Two years ago I found myself on the same early morning flight to Milan (“On MY plane,” as Marcello indignantly remarked when he discovered that I was on the same aircraft). Having spent the greater part of the journey putting the world’s design to rights, we said farewell only to find ourselves at opposite ends of the men’s urinals in the arrivals lounge ten minutes later. Having carefully placed his A4 black plastic portfolio up against my considerably larger A1 portfolio, he looked along the line of stoney faced businessmen between us and shouted in that unmistakably rich Italian accent: “Pheel… size eesn’t everything!”