The Natural History Museum has opened its first store outside of its South Kensington location as the latest part of its retail strategy to offer a range of focused shopping experiences.

The Dino Store pop-up is located in the Bluewater shopping centre in Kent and sells dinosaur products for children. It has been designed by Drinkall Dean, which has been working with the Museum on several other retail offers.

Drinkall Dean began working with the Natural History Museum in January on a temporary retail space for the Coral Reefs exhibition. It used modular display units that have since been reused around the museum for other temporary shops.

The consultancy then won a bigger tender to overhaul the Grade I-listed Waterhouse space, which was the existing retail space at the museum.

Consultancy partner Angela Drinkall says she looked to make it more interactive, “and a destination and experience” rather than “just a museum shop”.

“We had to look at the flow and tried to increase dwell time by creating a series of spaces like a digital lounge where the focus is online shopping and there are staff on hand to help,” says Drinkall.

The Natural History Museum can fit all of its stock into the store but a need for the online section was identified as many of the museum’s visitors are tourists who want to have products sent directly to their homes.

There is also a seating and reading area, a click and collect point, a large till area and service desk and a “Dino Arch” where children can sit on a bed and read.

“The retail thinking is much more holistic; it’s about the product range and service,” says Drinkall.

Materials, which have been brought into the space include “knotty old oak and steel with burn marks in it,” she adds.

Drinkall Dean then began work on a new space in the museum’s Red Zone where NHM was hoping to attract higher spend customers for its new design-led products aimed at adults.

Named the Cranbourne Boutique after a meteor of the same name displayed within the shop, the large space – previously a gallery – was a blank canvas.

“We kept materials natural but also used concrete and welding with burn marks and showed the fixturing. It’s a huge space so we made use of it with 5m high shelving around the perimeter.”

Now the temporary Christmas shop, Dino Store “extends the retail offer as a brand,” says Drinkall who has worked on branding with an in-house Natural History Museum team.

The shop sells personalised gifts as well as fashion, toys, models and games created with consultation from Natural History Museum palaeontologists. Everything is presented on bespoke units with wheels.

Natural History Museum’s head of retail Tracey Bates says: “This Christmas, some of our most popular dinosaur toys will amaze and inspire a new generation of young scientists in a brand new location.” 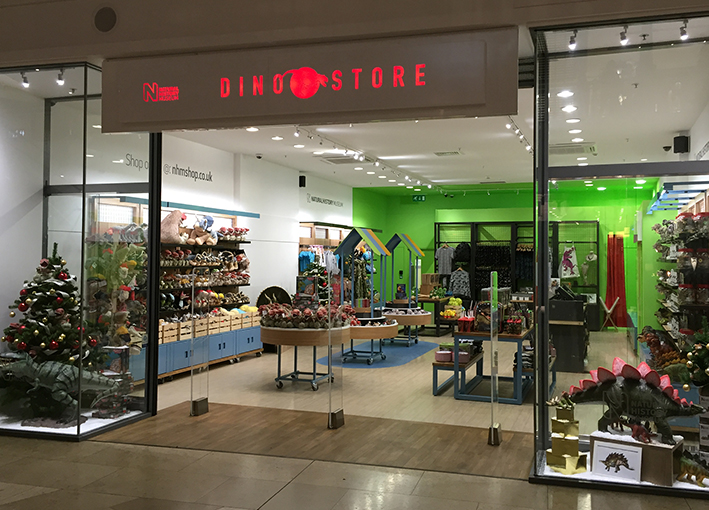