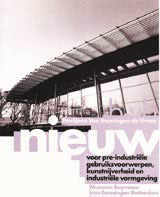 It is a pleasure to be praised by a fellow designer. But Michael Johnson (Features, DW 18 November) has an uncanny knack of pulling the rug from under you, even before the warmth of praise has faded. He liked CDT’s work for English National Opera. But in the same breath tore into its scheme for London’s South Bank Centre.

Johnson’s examples of what he considers to graphically ‘jump out’ includes his own work – not a good idea to show your own efforts if you want to be seen as objective. I’d direct readers to Graphic Thought Facility’s work for Shakespeare’s Globe Theatre (beautifully understated); Pentagram’s sterling work for the Crafts Council; and 8VO’s striking graphics for Museum Boymans-van Beuningen (pictured: poster, 1991). Both the latter two use Futura as their main typeface, but in a more innovative way than the Barbican work.

Designing for arts organisations is a delightful, but precarious occupation. Those who inhabit this world are often underpaid, under-funded, under pressure and leave for pastures new at an alarming rate. Relationships can be short-lived. This is the culprit of the erratic quality in this area. And not just in this country, as suggested. I could offer just as many bad pieces of work from the countries Johnson championed.

It is surprising when a past D&AD president, who encouraged the eradication of ‘mean spiritedness’, denigrates colleagues in our industry.

Wasn’t it also Johnson who wrote off the iconic Milton Glaser as passÃ© in this very publication?