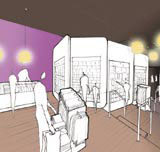 Urban high-street retailer Joy has appointed SHH to develop a new store concept across its portfolio, as it prepares to launch a wave of ‘second-generation’ sites across the UK.

The move marks the first time Joy, which specialises in selling quirky fashion, homewares and lifestyle accessories, has expanded beyond its network of six-strong London stores.

SHH was appointed last month and will work on designing outlets that are scheduled to open in Manchester, Leeds and possibly Liverpool, next year. It will focus on developing more ‘retail logic’, re-working circulation, signage and displays systems throughout the stores. The consultancy will also look at revamping Joy’s visual identity and brand.

Overall, the design concept will be developed ‘in accordance with the local marketplace, so the overall look will be flexible and fairly bespoke,’ according to Neil Hogan, creative director at SHH.

Maureen O’Brien, head buyer and co-founder at Joy, says, ‘It is the first time we have worked with a consultancy. We needed help to go forward.’

A 176m2 site, at the Triangle Shopping Centre in Manchester, will be the first of the new wave of stores to open this month.

SHH has created a mini-amphitheatre and stage area surrounded by drapery that will also serve as an entrance to the changing rooms.