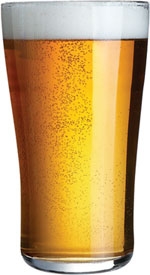 A new pint glass design is set to go into pubs in a bid to lessen the number of violent injuries sustained by broken glass in drinking venues.

Called the Ultimate Pint Glass, the design by France-based consultancy Arc International is the culmination of a three-year UK Government-led Design Out Crime project, overseen by the Design Council.

The launch of the completed Ultimate Pint Glass design today follows two prototypes Glass Plus and Twin Wall which were delivered to the same brief by consultancy Design Bridge in February 2010.

The two prototypes were designed not to shatter into shards. The Twin Wall comprises two layers bonded by a resin making it difficult to break, while the Glass Plus has a thin transparent coating of bio-resin, binding together dangerous shards if the glass is broken.

Arc International provided consultation on these prototypes and was also commissioned to continue with its own design, working up a separate product.

This design works on the principle that stress points are found where the thickness of glass increases.
Arc International marketing manager John Goodman says, ’Where there is a change in angle or a natural stopping point the glass will shatter when hit.’

Goodman says the Arc International design, which has more graduated changes in thickness, ’manages stresses’, mainly by adding a slight curve to the base.

He says, ’When the glass breaks the shock is transferred across the whole glass.’ This dissipates the impact and causes the glass to break into small ’harmless’ cubes.

Goodman says the glass is also toughened to make it difficult to break ’but not too tough’ as a toughened glass could be used as a bludgeoning weapon. This was identified as a problem with the Twin Wall prototype.

Equally, the Glass Plus design could have become a dangerous ’ball of glass’, says Goodman.

Arc International says other benefits of its design include an ergonomic ’shoulder’ created for the hand to rest against and a ’head booster’ that creates ’a constant stream of bubbles’. The glass is also completely recyclable.

Goodman says there are plans to take the concept to Australia, where ’the problem of glassing is more prevalent’.