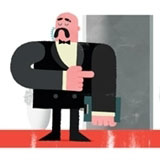 Over the past decade, merger and acquisitions activity in the UK design industry has been in decline, with investors looking to the East instead. There are still some deals to be made, however, and you’re more likely to keep some independence, rather than be swallowed whole, says Clare Dowdy

‘The excitement has gone out of design.’ That is how Bob Willott, editor of Marketing Services Financial Intelligence, sees it. He’s referring not to the delights of design itself (heaven forbid), but to merger and acquisitions activity. Since the frenzied dealing of the late 1990s, when the likes of The Partners, Tutssels and PSD were snapped up by WPP and Fitch (now itself part of WPP) respectively, design has suffered a lull. Jim Surguy, senior partner at Results Business Consulting, cites just a handful of purchases since then, including Identica to Canada’s Cossette, Marketplace Design to Media Square and Parker Williams to Envoy.

But why has design apparently fallen out of favour? And where does that leave consultancy owners looking for an exit? As with the housing market, the situation has as much to do with buyers as vendors. In the UK, the traditional buyers are sated. ‘I don’t think WPP or Omnicom [owner of Wolff Olins and Interbrand] will buy here. Their money is going into the Far East, Asia and Eastern Europe, where they get more growth,’ says Surguy.

This is confirmed by WPP’s latest acquisition, Ray Keshavan Design Associates in India. ‘We are always looking to build our capabilities around the world,’ says WPP chief executive officer Martin Sorrell.

Meanwhile, InterPublic Group, the FutureBrand owner that was a big player in the 1990s, is ‘busted’ and so not in a position to buy, even if it wanted to, Surguy adds. He suggests that only Publicis Groupe ‘would probably buy in design, as they have no one in particular at the moment [except Carré Noir]’.

And even if they were in the market for UK design, ‘WPP and Omnicom will not look at anything that’s not making £2m-£3m,’ claims Willott. Precious few independents do that on a regular basis. That leaves the newer, smaller marketing services groups like Creston, Media Square, Cello and The Engine Group (formerly WCRS). Aim-listed Media Square – which issued a profits warning at the end of September – owns Lloyd Northover (which subsumed Marketplace) and Holmes & Marchant, and it’s about the only one that has so far shown any appetite for design.

‘We’re not interested in the traditional design community,’ acknowledges Kevin Steeds, executive chairman at Cello, whose focus is market research, direct marketing and data. ‘Apart from a handful of agencies, it’s the most cottage industry of all the marketing services disciplines,’ he adds.

This sentiment is echoed by Creston chairman Don Elgie, who worries about design’s cyclical nature and its poor resilience to a downturn. ‘Design absolutely cratered at the end of the 1990s, and only a few agencies, including Jones Knowles Ritchie, have recovered. We’re interested in a minimum of £1m earnings before interest and tax (the industry standard), and precious few privately owned agencies make that,’ says Elgie. Or, as Ian Cochrane at Ticegroup puts it, ‘Companies like Creston and Cello have got investors to keep happy.’

Consultancy owners may be interested – or alarmed – that, though Elgie sees design as a criterion for Creston strategically, he believes he already has ‘a strong design element in the group from some of our marketing services companies’. Loewy is one of the few to be vocal about its desire to increase its design offer. Created in a five-way merger, including Raymond Loewy International in 2004, Loewy has financial backing from Channel 4 chairman Luke Johnson.

Design continues to interest Loewy chief executive officer Charlie Hoult, because he sees ‘convergence allowing people to create the message, brand and idea and then deliver it over a number of platforms’. But that consolidation is yet to happen with niche players in design, he says, so he wants to connect specialist groups together to give strong brand thinking. ‘We are creating a challenger to the stables of specialists at WPP, Omnicom et al.’

Willott describes Loewy as in the middle ground, so it can pick up smaller groups. In this way, it can get itself up to the size where it can float on the stock market. When pushed, Hoult admits, ‘We are exploring floating. Is it the best way to build a global, design, brand-led communications group? Probably.’ This is the raison d’être of roll-up companies – to keep buying until they’re big enough to float on Aim. New roll-up Hasgrove bought The Chase, and Surguy muses that it ‘might buy something else in London because The Chase’s London office is weak’.

But where does this lacklustre climate leave consultancy owners? The management consultants have identified those they consider ripe for a sale. Willott and consultancy Pembridge have both ear-marked JKR. The consultancy scored top marks in Willott’s Private Plums 2006 for privately owned marketing services companies. ‘JKR is one of the few with the scale and consistency in terms of financial and clients,’ says Willott.

Pembridge lists JKR as a ‘value realisor’, along with Checkland Kindleysides, Radley Yeldar, DCA Design International, Rufus Leonard, Conchango and Elmwood. These groups, says Pembridge partner Rose Lewis, are ready for a possible trade sale, management buy-out or management buy-in, as well as a stock market listing. No one at JKR was available to comment. Established groups such as Sandom Partnership and Corporate Edge are believed by some in the management consultancy to be considering selling, as is Seymour Powell. These three either declined to comment or were unavailable to do so. However, the management consultants are sceptical about the likelihood of them all converting into deals. ‘Corporate Edge is not quite as successful as it used to be,’ says Surguy, ‘and Rufus Leonard’s profits go up and down like a yoyo.’ Others in the industry suggest that Design Bridge – the subject of many a deal rumour in the 1990s – ‘has missed the boat’.

But attractive groups like Williams Murray Hamm get approached, and deals do happen. Indeed, Hoult had three design purchases lined up when we spoke, and Lewis wouldn’t be surprised if ‘a couple of deals with high profile companies went through in the next couple of months’. The difference is the way in which they are done, and the noise that surrounds them.

In the halcyon 1990s, ‘people liked to make a noise, because it put them on the map and made them look virile. It was good corporate PR. Now there’s less chest-beating,’ says Surguy. And, nowadays, it’s less about a consultancy being swallowed whole by a large predator. ‘With a smaller parent, it’s more likely that you will continue in the manner in which you are accustomed,’ suggests Willott. ‘A company making £1m a year that is bought by a business making £5m-£10m a year has more leverage.’ But, longer term, he admits that the buyer will still expect to increase the value of its purchase.

Some thriving independents just aren’t ready to sell. Those born out of the 1990s recession are not established enough for such a change. ‘It takes ten years to build a business up,’ says Cochrane. In the meantime, they can use their independence as part of their USP.

How to make yourself attractive to a buyer: