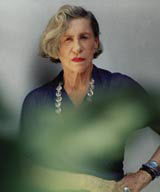 AndrÃ©e Putman, that inveterate grande dame of the design world, cuts a daunting figure – in photographs at least. Dressed in severely tailored, mannish suits, her hair coiffed into a leonine but immaculate bob, she is a paragon of Parisian chic.

Judging purely by appearances, she isn’t someone you’d want to cross in a hurry. This aura is to some extent justified by the bloodyminded intellectual independence she proudly traces back to her teens. Although brought up by cultured, relatively bohemian parents in Paris’ sixth arrondissement district, Putman rejected what she perceived to be an oppressively bourgeois upbringing at a startlingly young age.

‘Aged 15, I told my mother I wanted to clear my bedroom of all the objects that crowded it,’ she says. She replaced what she saw as status symbols that reinforced the snobbery of her parents’ milieu with a [Ludwig] Mies van der Rohe chair and a [Joan] MirÃ³ poster.

Her mother was in for another shock. ‘She wanted me to be a composer. But after studying at the Conservatoire in Paris, I decided I did not want her to rule my life,’ says Putman. ‘I told her I wanted to see the world and meet people.’

In the flesh, however, Putman isn’t at all forbidding. She explains how, after an abortive career as a design journalist, she joined Prisunic – the French department store ‘where the working classes shopped’ – for which she created ‘basics’ (from salad driers to childrenswear), but made them ‘look nice’. ‘I was like a nun giving up her life to the modest goal of making inexpensive things look beautiful,’ she says.

This was in the early 1960s, but Putman’s egalitarian philosophy cannily anticipated the revolutionary social changes precipitated by the Paris uprising of May 1968. ‘French taste was conservative then. Every bourgeois dining room mantelpiece had two candlesticks either side of a clock. We were fighting to breathe new life into French culture,’ says Putman.

In the late 1960s, she worked for advertising and design consultancy Mafia, which produced fashion/homeware mail-order catalogues for La Redoute, where, again, she subverted received notions of ‘good taste’. ‘We suggested women could wear Bermuda shorts, things like that,’ she says. Then in 1972, she joined Createurs et Industriels, an organisation that gave cutting-edge fashion designers a commercial leg-up. Putman vividly recalls Jean-Paul Gaultier, aged 17, showing up sporting jewellery that lit up. Other designers she worked with were Jean Charles Castelbajac and Ossie Clark.

Putman’s cross-fertilisation of fashion, art and design was radical at the time. Undeterred, she made a name for herself designing fashion boutiques (for Thierry Mugler, Yves Saint Laurent and many others) from the late 1970s, by which time she had set up her own design studio.

Putman, who created the set for Peter Greenaway’s film The Pillow Book, is now renowned for designing swanky spaces the world over – from New York’s Morgan Hotel to Concorde’s interiors for Air France. Not that she has reneged on her democratic principles, the thread uniting her total output being the suppression of her ego: ‘I design to suit the client’s needs,’ she says.

Not for her the theatrical statements of her compatriot Philippe Starck. The focus in her work is on simplicity, such intangible elements as light, predominantly neutral colour and the juxtaposition of ritzy and humble materials. In the late 1990s, she designed the interior of LÃ´ Sushi, a Paris sushi bar, brightening up a ‘depressing basement’ with Corian surfaces in 16 shades of white and a huge Hokusai- influenced wave in a ‘violent blue’. A second venue opened last May.

She is currently reconstructing the derelict, Cubist Tangier home of philosopher Bernard Henri Levy. ‘Its main feature is a beautiful staircase that slices diagonally through the space and gives access to most of the rooms,’ she says.

Another current project is a house in Tel Aviv, owned by a Swedish art collector, where American Olean tiles (used for factories and no-frills bathrooms) are contrasted with luxurious gold mosaics, to ‘introduce a note of frivolity’.

Putman also recently launched her own unisex perfume, packaged in a typically austere bottle – an ‘objet trouvÃ©’ – to which she simply added her own stopper. And she has just launched a collection of rugs for London specialist Christopher Farr, called Private Jokes. ‘I used colour just to tease those who think I reject it,’ she says, still tickled by the same sense of mischief that, back in the 1960s, marked her out as a maverick.

Olive rebrands Sangster and May