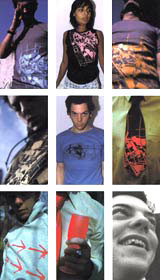 What have a retail website, a clothes catalogue and a contemporary furniture shop got in common? They are all new ventures set up by design groups as a sideline to their core offers. While many consultancies are moving into related businesses to enhance their offers -Design Bridge took a stake in brand development consultancy Illumination last year – Rawls & Co, Pool and Ally have taken a different approach.

Ian Logan has already done it – he set up a shop at the front of his studio to sell a variety of products he had hand-picked. Perhaps this latest breed will inspire others to stop talking about their bright ideas and act on them.

Graphics group Ally was established three years ago by creative director Susanna Cook. This summer the team moved into a three-floor building on London’s Lambs Conduit Street, with space to fulfil Cook’s dream of opening a shop, with an installation space in the basement. The ground floor is a showcase for contemporary British furniture, photography, jewellery, clothes and ceramics – much of it the work of designers Cook knows or has worked with. Photographs by Lorry Eason are currently on show and will be followed by abstract photographer Liz Rideal. Tom McEwan’s jewellery and CA1’s furniture is also featured. Meanwhile, Universal Utility, whose clothes are stocked by Knightsbridge boutique Egg, is designing an exclusive range of clothes for the showroom. The basement is being converted to house installations.

Rawls & Co launched Echochamber.com this spring as a website of information, news and views on the retail industry. The site’s aim is “to develop creativity and become the recognised resource for visual awareness in retail design”. It was set up on the back of an in-house research centre called Echochamber, established last year as a free visual resource centre. The site encourages dialogue and feedback, with free access, though users have to log on to the site. Individuals from BAA McArthur Glen, Thomson Holidays, Lunn Poly, Woolworths, WH Smith, Asda, Boots and Mars have signed up. It is deliberately not branded as Rawls & Co, and is intended to act as a forum for shared information between design groups, architects, retailers and ad agencies.

Echochamber.com includes a catalogue of retail design books, a monthly round-up of what’s happening in the retail industry, a weekly review of a window display, the Spyder retail auditing service and the facility to request analyses and reports on retail design trends. The consultancy is now looking to establish contacts to secure contributions from overseas.

Graphic designer Rupert Meats set up fashion label Rude after leaving Stocks Austin Sice. He teamed up with Abi Williams, a graphic designer trading as Pool, and they are now both involved in the two ventures. “Rude and Pool were growing at the same rate – it made sense to put them together,” says Meats, who sees a natural fit with fashion and graphics. In broad terms, he thinks Rude could move into a combination of fashion and homewares. “We want to move into wallpaper and duvet covers,” he says.

All of these ventures indulge the interests of the consultancies’ creative heads. Cook has a specific aim: “I want a cross-fertilisation of ideas through an unexpected mix of people.”

At the same time, the sidelines are a smart way to appeal to existing clients and engage new ones. Rude exhibited at 40¡, the fashion trade fair at London’s Earl’s Court last month, where it picked up orders from San Francisco and Tokyo. And when a buyer buys into Rude, Pool can step in to offer that same client packaging, identity and Web design, creating the potential for a double hit. “It’s a good way to get into the fashion design world,” says Meats.

For Ally, “It’s key for creative stimulation – clients, staff and suppliers will buy into the Ally philosophy and give more,” Cook hopes.

But how do clients really benefit? Echochamber.com has had 192 hits, 65 per cent from retailers. “It’s a useful forum for design and retail issues,” says Barclays visual identity and communications manager Dominic Jones.

Lisa Ray, innovations manager at Thomsons, describes it as a “useful source of information and stimulating; a quick and easy reference”. Both Ray and Jones already knew of Rawls & Co, and found Echochamber.com a soft rather than hard selling technique.

Ally client, Deborah Adams of Mission Management, a retail, property and marketing consultancy, says, “You feel like you are at the roots of design, with new talent coming in through the exhibitions, keeping the environment fresh and therefore the ideas fresh. The new space gives you a lot to think about, and gets the creative juices flowing,” she adds.

The space “instils confidence that Ally is willing to pull in other relevant allies [collaborators on projects], they are open and receptive as a company”, says Emma Solange Oldham of design emporium Space on London’s Westbourne Grove. Ally has just designed Space’s bed linen catalogue, called Boudoir. “The space blatantly lets the clients know Ally has allegiances with photographers, artists and other designers,” Solange Oldham adds.

Cook thinks her efforts are paying off: “We are getting more creative jobs because people’s perception [of Ally] has changed.”

These design consultancies have managed to find an outlet for passions or interests which complement their main business. And, as long as clients don’t become confused about what the business has to offer, these newer ventures are likely to blossom.

Blair to head Nowhere after the Design Council