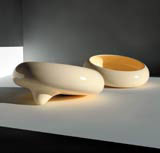 Since then, through word of mouth, the group has created a packaging visualisation for a pitch for Saturday, and a 3D rendition of Venture Three’s new identity for Sky. Neither Cox nor Holding has any training in graphic design, but they believe this is to their advantage – approaching it from a different angle, they can bring something fresh to it. ‘We think in 3D,’ says Cox. Morph’s graphics tends to be in the form of illustration (the duo spent a year and a half creating illustrations for Habitat packaging), rather than full-blown identity systems.

Holding and Cox emphasise how hard they have grafted to get to where they are. ‘We have worked day and night for five years, taking everything that comes our way,’ says Holding. But they haven’t found the design profession as cut-throat as they expected. The older generation appears to be happy to mentor them. Sharing a studio space with Sodeau must help this process. ‘He sometimes gives us another opinion on a design, and can tell us if it’s been done before,’ says Holding.

Holding acknowledges how lucky he and Cox are to have gained experience with big-name designers. Not only has it been good for their work, but it has made them commercially aware about what sells at what price – something that college doesn’t teach. ‘It’s impossible to work with someone like Saville and for it not to rub off,’ he says.

The duo has been pleasantly surprised that designers can be keen to collaborate. Morph has joined forces with fellow young gun Sam Johnson on furniture ranges for Modus, unveiled last year. And it has developed, with Levine, a layered crystal table lamp with filters and diffusers, Laserpod, which launches imminently.

While Holding might do more of the talking, the design process seems to be truly egalitarian. Neither partner leads on creativity or decision-making, rather an idea is developed through suggestions and constructive criticism. The Mono Clock for Habitat, for example, which launches next summer, grew out of Cox’s idea to incorporate a steel ruler to measure time, and Holding’s separate idea for a single-handed watch.

And the duo claims not to have had an argument in five years of working together.

Despite the variety of work that comes along, product and furniture design remains Morph’s first love. Illustration projects have opened the group’s eyes to pattern and colour, and it’s likely that its 3D designs will also be influenced in this way.

Now that the group has done its apprenticeship servicing established designers, it is hungry to do its own thing. With 100% Design just round the corner, it has designed a rotational-moulded stool for Modus, called 10º. Furthermore, to celebrate the show’s tenth anniversary, ten designers who exhibited in the original exhibition have nominated new talent. Morph has been selected by Michael Young to be part of the accompanying show, 10×10. Alongside the likes of Emma Jeffs, Sam Johnson and Gabriele Pezzini, it will show its 10Ëš stool, a prototype hexagonal wine rack, Mono Clock and other Modus pieces.

Meanwhile, a major project is also in the pipeline. Along with Johnson, Morph is setting up a company, called Sunday, with an as-yet unnamed eco-friendly British contract furniture manufacturer to design ranges for the domestic market. Holding describes it as ‘a golden opportunity – [as] designers, we’ll have a free rein’. Which is what Holding and Cox wanted all along.

Room Glasgow on the menu for APA

We at design’s coal face need a modern day bible