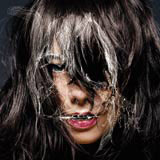 You can argue that everyone’s handwriting is as individual as snowflakes. That it is constantly evolving – mine certainly never looks the same from one day to the next. This would suggest it brings endless possibilities to design, but even in such a defined area, particular styles are prevalent in particular eras. Naive, deliberately wobbly black capitals with the odd crossing out (Ã  la Davis) are currently favoured, as are flowing, thick, lower case brush strokes, which look peculiarly French, and often are. The current vogue for handwriting has undoubtedly arrived hand-in-hand with the recent renaissance in illustration, and if words aren’t actually incorporated into a busy pictorial tableau, handwriting tends to be used in a very illustrative way.

But various different takes on illustrative lettering have been with us for decades, centuries even. Ralph Steadman has been making his distinctive blotchy pen marks for years. Further back, US masters Paul Rand and Saul Bass were hand-rendering type to great effect. Agitprop posters from the 1960s favoured a lo-tech, anti-bourgeois approach, so handwriting was perfect. European lithograph poster artists of the 19th century, including Alphonse Mucha, Jules ChÃ©ret and Henri Toulouse-Lautrec, seamlessly integrated words and images into their work. The main difference now is that it’s a deliberate stylistic statement, used to inject verve and personality into design.

‘[The Apple Macintosh has meant] there’s been less emphasis on drawing in design schools,’ says US-born, UK-based designer Norman Hathaway, who originally trained as a sign painter and often incorporates hand-drawn type into his work. ‘But that’s changing. Craft isn’t so nerdy any more. People are getting more into it and it’s gaining more respect.’

Of course, there are designers and illustrators who use handwriting well, and others who use it less well. And as it is assimilated into the mainstream, its power to surprise and prickle diminishes. Almost inevitably, a glut of digitised handwriting fonts has hit the market, totally contradicting and undermining the purpose of original, idiosyncratic lettering. Perhaps it’s only a matter of time before the backlash begins.

Handwritten – Expressive Lettering in the Digital Age by Steven Heller and Mirko Ilic’ is published by Thames & Hudson on 13 September, priced £24.95