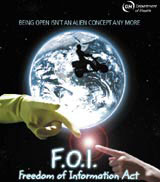 Redhouse Lane has created a series of film-focused posters to inform workers in the Department of Health of their rights, as the department prepares for the Freedom of Information Act, which comes into force in January 2005. A pastiche of popular film posters, the work has been created to stand out in an environment known for its ‘poster overkill’, says senior designer at Redhouse Lane Andy Davies. A new version will roll out each month.