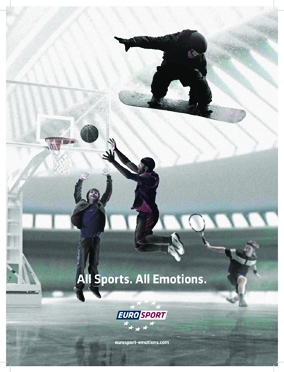 London-based group Intro has also worked on the project, creating a corporate campaign from elements of the Les Télécréateurs on-air rebrand and forming the new Eurosport tagline ‘All sports. All emotions’.

Les Télécréateurs was appointed in July 2010 and was briefed to create a visually engaging identity that supported Eurosport’s brand values of emotion, live action and diversity of sports, says a Eurosport spokesman.

The consultancy has refreshed the existing logo, introducing the font Klavika and using white stars instead of the original blue, for a cleaner feel, says Eurosport Group chairman Laurent-Eric Le Lay.

Le Lay says, ‘Live sports generate powerful emotions for sports fans and we wanted to create an environment centred around these emotions, putting the fan at the heart of the action.’