Here at Design Week, we love design. Most of us here, also love gin. So, tying in neatly with the forthcoming nuptials of Kate Moss, it really is a marriage made in heaven to see the worlds of gin and design collide in a truly spectacular way.

Launching at the Milan Design Week next week is Vapour Infusion, the inspired brainchild of London based designer Moritz Waldemeyer, which sees the gin distillation process played out in a vivid visualisation.

The Bombay Sapphire Vapour Infusion Piece bathes the space in a bluish light using clever lighting technology and hand-crafted elements to illustrate the Bombay Sapphire mélange of the modern and the traditional.

The sculpture uses more than 2000 LED lights in a thin curved screen, with each creating its own miniature lighting system. When combined together, these simulate rising vapour; just as the gin vapours rise during distillation. 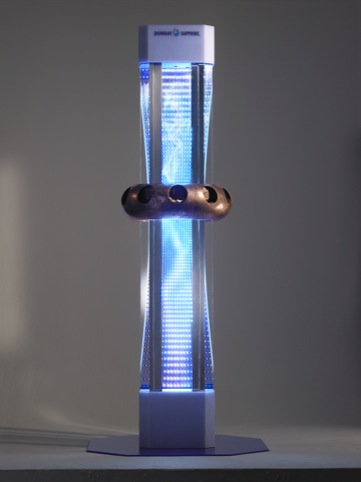 Ever faithful to the distillation process itself, the sculpture features ten compartments for each of ten the botanicals used in Bombay Sapphire Gin. The heady aroma of these botanicals is released as a mist through the top of the sculpture.

Which reminds us of this:

Designer Moritz Waldemeyer says,  ‘I’m very excited about the technical innovation used, which I believe has delivered really beautiful aesthetics. I have taken the very essence of Bombay Sapphire and delivered innovation, elegance and an intriguing multi-sensory experience.’