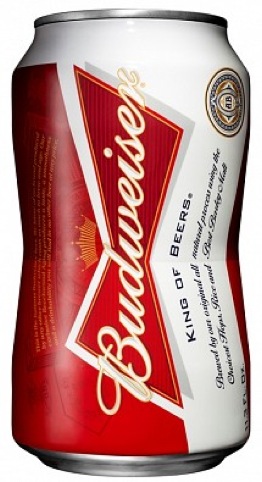 The can will launch in the US next month, but will not be available in other countries.

Pat McGauley, vice president of innovation for Anheuser-Busch, Budweiser’s parent company, says, ‘This can is incomparable, like nothing you’ve ever seen before.’

He adds, ‘We explored various shapes that would be distinguishable in the marketplace, but also viable from an engineering standpoint. Aluminium can be stretched only about 10 per cent without fracturing, which requires that the angles of the bowtie be very precise’.

According to Budweiser, the development of the can by Anheuser-Busch engineers required ‘major equipment investments’ at Budweiser’s can-making facility in Newburgh, New York.

It adds, ‘Significant capital investments also were required to upgrade packaging lines at the Budweiser breweries in Los Angeles and Williamsburg, Virginia, the first breweries with capability to package this unique can innovation’.

The can, which has been in development since 2010, will only be available in eight-packs, and will not replace the traditional Budweiser can.

The brand says there is ‘no written documentation on the origins of the Budweiser bowtie’, but that the double-triangle bowtie logo was introduces to emphasise the full Budweiser name ‘when too many people were using the “Bud” bar call too frequently’.

The brand says the bowtie symbol was first used in a Budweiser national advertising campaign in 1956.

The launch of the can on 6 May is being supported with a marketing campaign that includes digital, print and television. It will be available in US grocery stores, supermarkets, convenience stores and liquor stores, according to the brand.