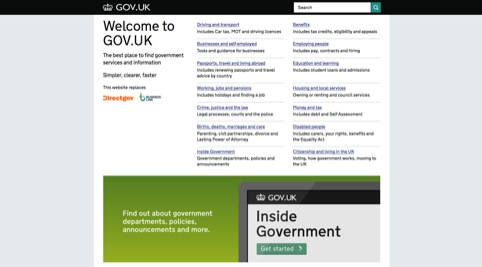 The project saw off a shortlist which included the Morph Folding Wheel, designed by Vitamins, and Konstantin Grcic’s Medici Chair.

Gov.uk launched at the beginning of last year, and is intended as a one-stop shop for Government services, where users can, for example, register for a birth certificate, apply for UK citizenship or find out when the next bank holiday is.

The site has now brought in 21 of 24 UK ministerial departments and is also folding in more than 300 other Government departments and organisations, such as the Driving Standards Agency and HM Revenue and Customs.

As well as publishing the gov.uk design principles online, GDS also put the website’s code on Github, allowing sites worldwide – such as Honolulu Answers – to emulate it.

Prime Minister David Cameron says, ‘Gov.uk is just another example of Britain’s world-class design talent standing out on a global stage; in this case helping to enhance the modern relationship between the public and Government.’