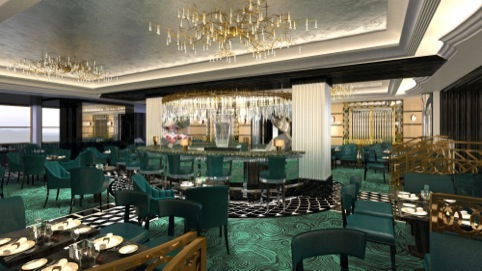 The new restaurant, which opens on 2 May, is positioned as an ‘informal yet luxury dining’ offer according to The Savoy, which has branded the restaurant in-house and named it Kaspar after a sculptural cat designed for The Savoy as a figure of good luck by Basil Lonides in 1926.

The Lonides sculpture is being reintroduced as an abstract form in a new sculpture by Jonty Hurwitz.

According to Robert Angell of Robert Angell Design Studio, the consultancy was approached in September 2012 and asked to overhaul the interiors of the restaurant, then known as River Restaurant.

‘It opened in 2010 but wasn’t really attracting a wider audience – like the theatre or opera house crowd.

‘We wanted to create something radically different that was relaxed, sophisticated and welcoming,’ says Angell, who has looked to ‘mix a modern food service offering with the glamour of The Savoy’s art-deco period.’

Hand-slumped glass, a feature chandelier, mother of pearl shelves, chrome finishing, shiny black marble surfaces, and a ‘tea-swirl’ carpet signifying the ebb and flow of the Thames have all been introduced.

‘New lighting and a central feature chandelier over the bar will make Kaspar’s unique and instantly recognisable as part of The Savoy,’ says Angell.

‘The walls feature beautiful sycamore panels with ebony inserts to contrast and bring them alive. The ceiling will be silver leafed to bring added glamour of the Deco period,’ he adds.

Design studio Reggie London has created new branding for Oxsight, a technology company that creates glasses which aims to help those with sight loss.