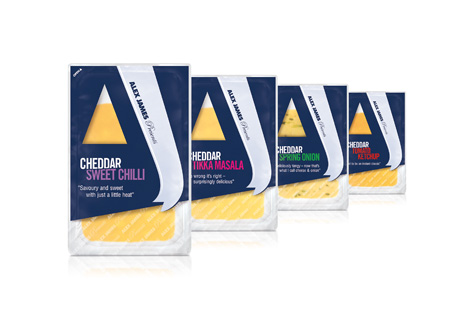 The Blur bass-player has spent the last year on his Oxford farm developing the range, which features blocks of cheese, bread-shaped slices to make toasties and ‘Spudsworth’ cubes that can be melted down and poured over baked potatoes.

The range, which is set to launch in Asda stores next week, also features cheddar blended with tomato ketchup, salad cream and tikka masala.

Aesop says, ‘The identity portrays James as a cheese luminary – not the bassist from Blur.’ The brand marque features an ‘A’ and a ‘J’ rendered as a slice of cheese and a cheese knife respectively.

The Alex James Presents branding appears as if etched on the knife and a silver and stilton blue colour palette is used throughout.

Martin Grimer, executive creative director of Aesop, says, ‘This is supported by flourescent colour descriptors and engaging copy (much of which comes from the man himself).’

James and Aesop have been working together since the consultancy was founded in May. Referring to the new range, James says, ‘I’m hugely passionate about this range and I’m so excited that I’ve been able to bring it to life… It’s definitely cheese, but not as the nation knows it.’