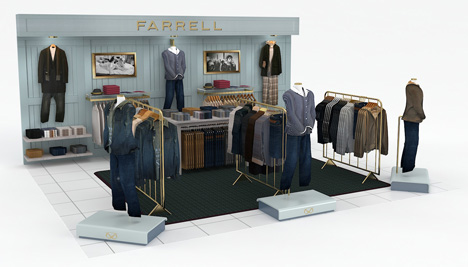 The consultancy was appointed to the project about ten months ago, having been approached by the client to put forward a creative proposal.

The branding and visual identity for Farrell was created by Tom Hingston studio, which Barber work closely alongside on the retail concept.

Doug Barber, managing director of Barber Design, says, ‘The brief was quite open. We focussed on the 1950s and 1960s era, akin to everything else that was going on with the product range.’

Barber adds, ‘We took lots of touches from the era in terms of hand-painted finishes, brass, classic cars – its based on the craftsmanship of the time.’

Barber adds that a ‘Brand ribbon…runs thoughtfully through the product, the brand identity and the environment to crease a consistent retail experience.’

The concessions launch on 2 September.