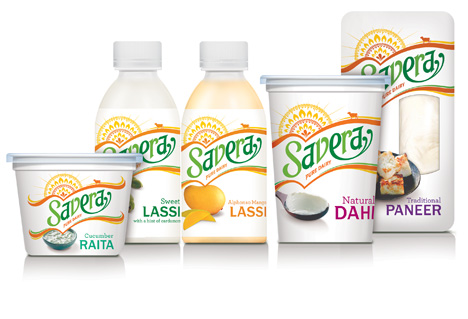 The consultancy was appointed after working on earlier projects for Arla Foods, including work on butter brand Lurpak.

Following three years of research, Dragon Rouge worked alongside the brand to develop the brief for the look and feel of the range, which aims to encourage consumers to buy fresh Indian products in larger supermarkets.

The range features products including lassi, paneer cheese and raita.

Deborah Carter, senior consultant at Dragon Rouge says, ‘The overall look and feel of the brand comes from the idea of dawn and morning, which links with the idea of dairy foods. We used Indian imagery but wanted to make sure that it would look enticing in a mainstream supermarket.’

Dragon Rouge created the brand positioning, identity and packaging for the range, and created brand guidelines for the identity’s use on other touch points such as point of sale and online in future.

The design uses colours that reflect the Indian flag while retaining the white and freshness associated with dairy. The name Savera was chosen due to its Hindi origins, and because it is also widely understood in all Indian languages yet is memorable and pronounceable for other consumers.

Savera will launch at the Indian Mela food festival in Ealing, West London on 3 September, and will launch in supermarkets from October.