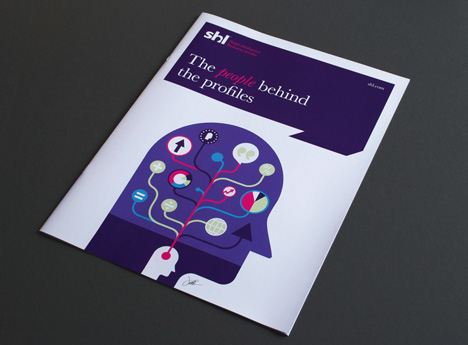 The consultancy was appointed in May 2011 following a three-way credentials pitch.

Initially, it was appointed to refresh the brand, but as the project evolved it created a new logo and modified the purple and pink colour palette to make it ‘more purpley’.

Paul Barlow, creative director and founder of L&Co, says, ‘Before, the brand used generic photo library images, which we felt was inappropriate as we wanted to make it really personal and individual – they really want to be bold.’

He adds, ‘[SHL] is all about people, so we used big profile faces and brought that into the logo.’

Nine illustrators were commissioned to create images representing the company’s different areas, such as ‘employee development’ and ‘talent acquisition.’

The new visual identity will be seen across all collateral including stationery, signage, marketing materials, trade exhibition stands and the website, which was built by a US-based web design team. L&Co created brand guidelines and worked alongside SHL’s in-house studio to launch the new designs across Europe, Asia, the Far East and America.