An artist, a composer, a poet and 40 young people from east London have created songs and artwork for a concept album about London’s canals. 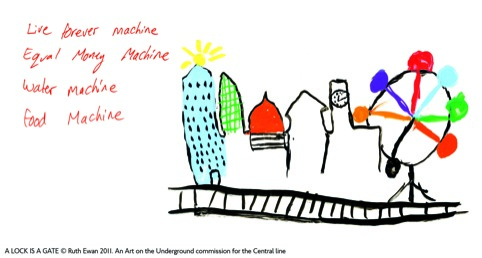 A Lock is a Gate uses music, sounds and drawings to tell the story of a group of young voyagers who take a canal trip through London. Along the way they pass through a long canal tunnel, negotiate a lock and see new sights.

Artist Ruth Ewan, composer Kerry Andrew and poet Evlynn Sharp worked with young people aged between 9 and 19 from the Laburnum Boat Club for the project, which is part of Transport for London’s Art on the Underground programme.

In a series of workshops held this spring, the artists and the youngsters came up with nine songs telling the tale of the journey, including Journey Through the Canal Tunnel (Orange chalk! White goo!) and Like Fireworks (Green means happy, yellow means happy, red means angry, blue means sad. And that’s all I know).

As well as working on the songs, the team has also created a series of drawings which follow a parallel journey along the canal and are designed to be looked at while listening to the album. The resulting booklet is designed by Rose.

Two artworks will also be installed in Bethnal Green Tube station, based on drawings created in response to the songs.

A special edition of the album as a CD with sleeve artwork is available free from the V&A Museum of Childhood and other venues. To listen to the songs visit http://art.tfl.gov.uk/projects/detail/3527/