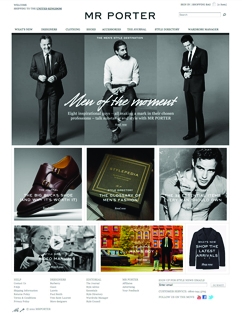 The consultancy has been developing the project for the past 16 months, working closely with Net-A-Porter founder Natalie Massenet and her team.

Wednesday approached Massenet in November 2009, having heard that she was planning to create a men’s version of the Net-A-Porter site. It presented its creative thoughts on the site alongside sister company Saturday, which created the site’s identity.

Oliver Walsh, managing partner of Wednesday, says, ‘We thought about the male consumer and the psychology behind it. With other sites, men are really an afterthought.’

He adds, ‘Men don’t really like shopping in general, so we had to make it as easy as possible. But once they overcome that, they can be incredibly loyal customers.’

Wednesday worked across all aspects of the site including website design, editorial and marketing strategies.

Walsh says, ‘We wanted it to be a modern classic. We wanted it to feel established, so we used bold elements in black and white. It’s a canvas for the products and content – we didn’t want to detract from that, so it’s simple and functional, yet beautiful.’