Here at Design Week, we like a good infographic, and we’re quite partial to the odd VJ set too. So it was with great pleasure that we received word of Rehab Studio’s live motion graphics project for Last FM.

If you haven’t come across it already, Last FM is a online music social network that allows you to both listen to and recommend music by your favourite artists.

Each time you listen to a track either through Last FM or other media players, it ‘scrobbles’ it and presents you with statistics about what you listen to the most and gives you other recommendations based on your profile.

On Friday, Last FM hosted its first festival, with events in London and New York on the same night, which saw sets from The Futureheads, Young Knives, and Tokyo Police Club.


Rehab Studio was briefed by Last FM to create live motion graphics fed by the Last FM profiles of people in the crowd. The visuals showed statistics about the users at the gig and the artists playing, including who had ‘scrobbled’ the artist the first and most often and then gave collective music recommendations.

There was also a little bit of competition to the visuals, as London’s music lovers where pitched against their counterparts in New York to showcase the two cities’ music tastes, top tracks and listening habits. 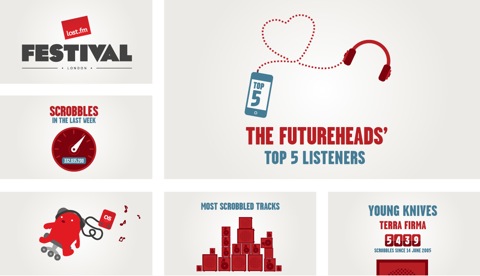 There are plans to broadcast both events on Last FM’s website, which will include Rehab Studio’s data visualisations.