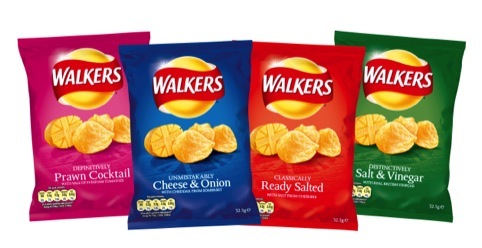 A new look has been designed around new positioning, which brand owner Pepsico is calling, ‘The biggest flavour innovation around the product for ten years.’

The Walkers identity has been tweaked and pack colours are now ‘deeper and richer’ to communicate quality according to Pepsico.

Nine flavours have been renamed and each now carries a strapline. They include: Definitively Prawn Cocktail with Vale of Evesham Tomatoes; Unmistakably Cheese and Onion with Cheddar from Somerset; Classically Ready Salted with Salt from Cheshire; and Distinctly Salt & Vinegar with Real British Vinegar.

A graphic made to look like a cross section of a potato features the words ‘Home Grown’ across a Union Flag, which can also be seen as a drop shadow.

Tractor-shaped display units, and point of sale featuring ‘iconic British scenery’ will be rolled out in-stores and new ad campaigns will air in March.