Appointed in October 2012 by sports media group Perform, which owns Goal, Elmwood sought to help Goal define its market position as a single destination for football fans all over the world.

‘A lot of the work was about trying to define Goal with a universal symbol. When it’s written as text, you encounter problems like language and pronunciation,’ says Elmwood senior designer Simon Morrow.

The goal symbol will initially be used in conjunction with the word ‘Goal’ but this will be phased out so that the symbol alone becomes the identity.

Meanwhile it is hoped the brand will become known as ‘Goal’ rather than ‘Goal.com’, which will make it ‘more confident and single minded, as well as being more relevant for tablet and mobile devices,’ says Morrow. 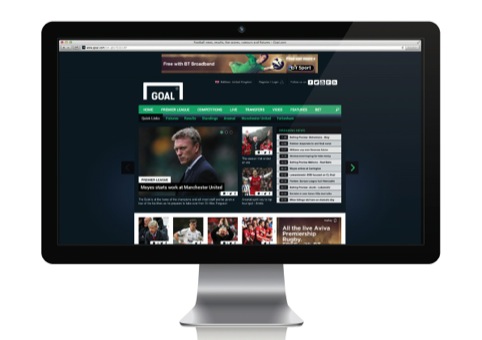 Previously the site used a lot of red and white. The new look sees a very dark blue brought in – ‘which is club-neutral and gives plenty of contrast for the white goal posts of the identity,’ Morrow says.

To create a ‘vibrant but not immature’ colour palette green, ‘hot orange’ and cyan have been introduced as highlight colours. 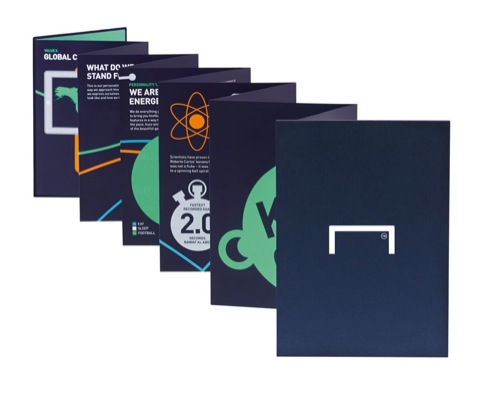 Full colour, full bleed imagery has been introduced ‘and across the site nothing is over stylised – so there is an emphasis on legibility and authority,’ says Morrow.

The site navigation allows football fans to tailor information so they can focus on the game in a particular country, or chose an international outlook.

As Goal has around 500 journalists based around the world, Elmwood wanted to ‘make them feel engaged and make the brand feel precious,’ says Morrow who has worked on an A6 concertina brand book, to be distributed as an internal communication.