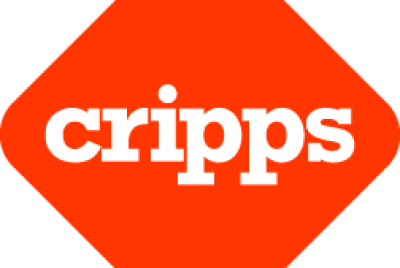 The rebrand was prompted by the merging of Cripps Harries Hall and Vertex Law and their subsequent renaming.

The name was coined by brand strategist Bruce Webster following a period of research in which he helped define the brand values of the business.

Mike Dempsey of Studio Dempsey says he has created an identity for the new business after being brought into the project by Webster.

Dempsey says, ‘Reading Bruce’s research I got a sense of their personality and what they’re trying to do.

‘They’re based in Tunbridge Wells and are 350 staff strong so they compete with the London firms, but don’t want to be seen as an out of town firm.’

Dempsey sought to ‘create a mark unlike that of the London law firms’ that would go ‘one step further in design terms’ he says.

‘They all tend to be long strings of names written in a classic type to try and look dignified. Cripps Law is memorable so it needed to be represented by a device you recognise quickly.’

An orange colour was chosen as a point of difference from other law firms ‘who always use the same colours’ says Dempsey.

This is Cripps is an internal document, which is aimed at staff and looks to inform them of the personality of the firm with a story illustrated by Carlin.

With You takes the client on journey and shows how the firm deals in corporate or family law and shows that ‘law is a jungle, but with the right guidance you can be taken through its complexity,’ says Dempsey. It has been illustrated by Carlin, Ford, Kirkham, Simpson, and Van Ryn.

Dempsey says, ‘In both cases we used illustrators. Other firms always use photography with people in suits pointing and smiling; it’s so predictable and we thought, “let’s treat this like a story and give it some charm.”

They came from outer space