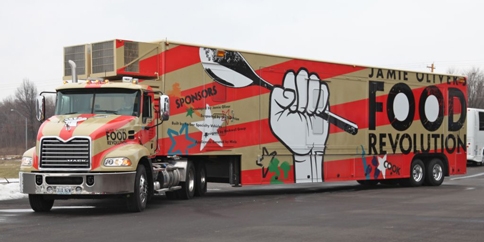 The truck will travel to communities across the United States to teach children, parents and professionals about food and cooking.

The truck is part of a drive launched by Oliver in conjunction with the American Heart Association and The California Endowment to bring food education to communities in the US.

Speaking at the launch of the programme at the TED conference in Long Beach, California, Oliver said, ‘Not only do we have a world-class mobile teaching kitchen, but with the AHA and TCE partnerships, we are starting to reach communities that we never could have dreamed of.’

The exterior of the truck features a logo of a hand holding a spoon and a sunburst theme, inspired by the graphics from Oliver’s ABC TV show.

The truck’s interior is covered with white wallpaper with a set of tiny culinary graphics.

David Rockwell, founder and chief executive of the Rockwell Group, which worked on the project on a pro-bono basis, says, ‘We feel that design plays an important role in sparking children’s imagination and sending them on the road to a better life.’

After the seeds settle