The chair has been developed with the Department of Health as part of its Innovation Health and Wealth programme.

Wheelchair services is one of six high impact areas of reform which the Department of Health is investing in.

Renfrew won a government tender in October 2012  and has sought to design a chair which aims to maximise the mobility and independence of disabled children as they grow into adulthood.

Its design ‘addresses the physical and social demands of 80 per cent of pediatric, powered wheelchair users aged 4 to 18 years old,’ according to Renfrew.

A universal modular platform can be updated and modified with a variety of standard attachments and bespoke ones. 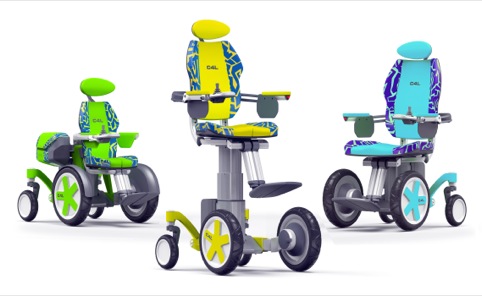 The seat grows via the implementation of ISO Mount – ‘a universal modular docking system that attaches the seat to the chassis lift mechanism allowing swift replacement of successive seating modules’, Renfrew says.

It can be modified quickly to accommodate monitoring and care equipment, extra storage and accessories.

The system also gives third party manufacturers the ability to provide upgrade features within the fixed base platform.

‘This means more patient choice, improved quality of products and new components to drive innovation within the industry,’ says Renfrew.

Other features include vertical lift as standard – a feature demanded by young users, to allow eye level interaction with peers, which the consultancy says will facilitate social and educational development and improve feelings of dignity and independence.

An adjustable wheelbase ensures adaptability for indoor and outdoor conditions as well as the option for compactness giving greater maneuverability in small spaces.

The Chair 4 Life has been developed into a working prototype and the Department of Health is now addressing a manufacturing tender ahead of a national roll-out.

Inside Design with Bethan Gray