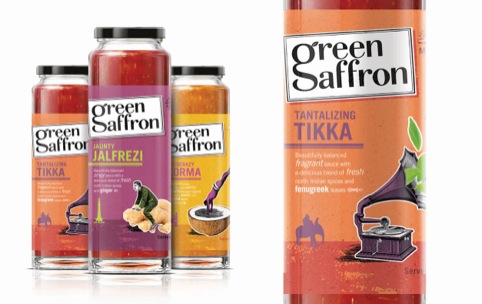 The consultancy was appointed to the project about a year ago having been approached by entrepreneur Arun Kapil, who founded the brand.

Blue Marlin was tasked with creating an identity that conveyed the ‘colourful story and sheer enthusiasm at the heart of the Green Saffron brand’, it says.

The packaging for the range of five dry spice blends, three sauces and the Christmas line uses collage-like images featuring Victorian illustrations and drawings of fresh ingredients, aiming to reflect the brand’s ‘eccentric character’, according to Blue Marlin.

Simon Pendry, Blue Marlin creative director, says, ‘We liked the oddness of the name – I think [Kapil] chose it because it’s an Irish brand, hence the green, and saffron might have been his mum’s favourites spice. We really liked that odd combination.’

Pendry says the idea of the ‘blended’ name and blending the spices informed the graphic look, which uses found images such as Victorian engravings and illustrations and a ‘tertiary’ colour palette.

He says, ‘The language is a bit different too – it’s not just korma, it’s “Coco Crazy Korma” or “Jaunty Jalfrezi.” There’s an element of humour.’

The brand is currently going into stores in Ireland and it’s hoped that it will then be stocked in the UK.