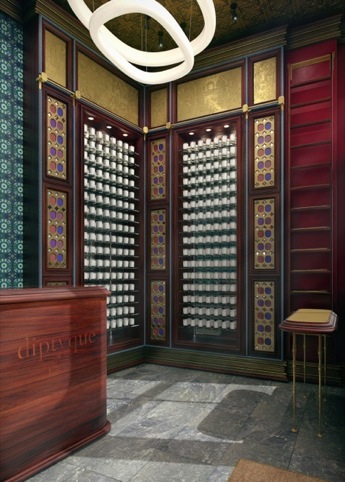 Jenner was appointed on the back of designing Diptyque’s New York store, and a pop-up concession for the brand in department store Liberty.

The new space in London’s Leadenhall Market has informed the design which is positioned as ‘a marrying of Victorian design with the heritage of Diptyque,’ according to Jenner, who says with only a 16m2 space he has had to make full use of the 5m-high walls.

‘Everything in the shop is handmade and we’ve worked with English craftsmen throughout,’ says Jenner, who has commissioned bespoke wallpapers, one of which borrows a motif taken from the central ceiling structure of the market.

Stained-glass backlit cabinets have been created with a ceiling-height ladder on brass runners to slide across them.

Walnut furniture has been hand-made and ‘gothic revival patterning’ is found in both cabinetry and wallpapers.

A 98 per cent spray metal has been used to create ‘homogeneous surfaces’ including the pressed ceiling, where tin has been sprayed to give a brass effect.

The new store opens on 3 September.