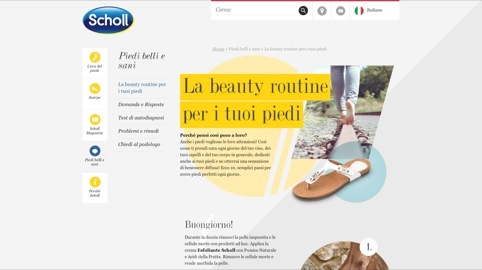 The new designs are initially launching in Italy – on Italian site www.scholl.it – and will launch in the UK later this year.

LBi was appointed to the work following a pitch and was tasked with developing a new platform to replace the previous brand website.

The consultancy says the new designs are particularly aimed at a female audience and that it has looked to ‘connect with customers by informing them about the benefits of regular footcare as a key part of a daily beauty regime’.

Abi Ellis, group creative director at LBi, says, ‘We’re aiming to engage Scholl’s female audience on an emotional level rather than just a functional one by creating content which demonstrates how regular footcare can reward and empower you every day.’

Lighting up the Queen

Pentagram partner Paula Scher on working from ‘an opposition to something’

Lighting up the Queen