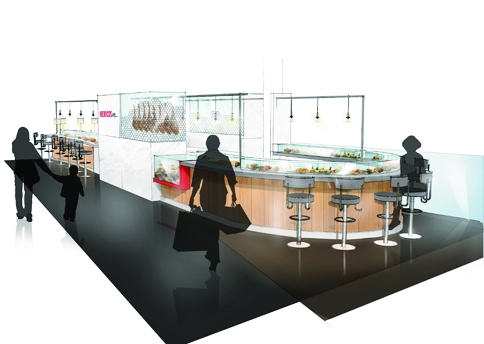 The consultancy was appointed by the client, chef Omar Allibhoy, to create a traditional tapas bar, which was big enough to cope with a large volume of shoppers and fast turnover.

Design LSM was briefed to keep the traditional feel of an authentic tapas bar and display Spanish produce such as ibericos and hanging hams as part of the interiors. Design LSM co-founder Steve La Bouchardiere researched traditional bars by visiting restaurants in Madrid and Barcelona with Allibhoy.

The bar, which will open on Westfield’s mezzanine level on 22 November, features two 20m pewter counters with a timber frontage, which both house dishes and act as an eating area. High stools allow customers to dine at the counter and the area has been lit with suspended pendant lights to create intimacy around the space.

A spokeswoman for Design LSM says, ‘The biggest challenge was designing a counter large enough to accommodate 43 covers with limited space without feeling restricted.’