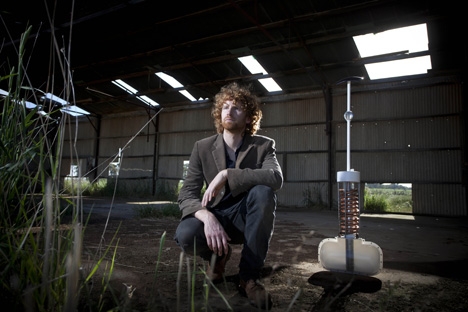 Linacre’s Airdrop system works on the principle that even the driest air contains water molecules which can be extracted by lowering the air’s temperature to the point of condensation.

The system pumps air through a network of underground pipes to cool it to the point at which the water condenses. This water is then delivered directly to the roots of the plants.

Linacre, who studies at Swinburne University, Melbourne, says he was inspired to develop the solution following a serious drought in the Victoria and southern New South Wales areas of Australia.

He then studied plants such as the self-irrigating Desert Rhubarb and the Namib beetle, which lives off the dew it collects on the skin of its back in the early morning.

Linacre says, ‘These stories inspired me to investigate low-tech, atmospheric water-harvesting solutions. Harvesting water from air is an ancient technique, I needed to find a modern solution.’

Sir James Dyson says, ‘Airdrop shows how simple, natural principles like the condensation of water, can be applied to good effect through skilled design and robust engineering.’

The runners-up in this year’s awards were the Blindspot, an aid for visually impaired people developed by Se Lui Chew from the University of Singapore, and the Kwick Screen retractable room divider developed by Michael Korn of the Royal College of Art.

Korn’s room divider won the UK leg of the Dyson Award seeing off a shortlist that featured a pipe pump designed for the developing world and an easy-to-manouevre shopping trolley.

The Amo Arm, developed for amputees by Michal Prywata from Ryerson University in Canada, was highly commended.

The annual James Dyson Award is open to students and graduates of product and industrial design courses from around the world.