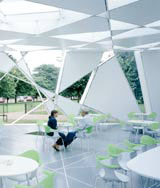 High summer has arrived. I’m in London’s Hyde Park, and there are kids and sunburnt noses everywhere. To top it all the biggest seasonal barometer, the Proms, is in overdrive.

The Royal Albert Hall, their long-time home, stares out its newer, gawdy relative, the gold-encrusted Albert Memorial. Two monuments within spitting distance of each other suddenly seem a touch greedy for someone who wasn’t even king, particularly with the proximity of the Victoria & Albert Museum. But I’m not here on a republican rant, I’m here to check out Hyde Park’s temporary summer installations.

My first port of call, opposite the memorial, is a tent staging an exhibition of Libyan art and antiquities. Designed by Jasper Jacob Associates, the marquee is covered in a gauze depicting scenes from the Libyan desert. But the soothing effect is dispelled by taking a turn round the non-road-facing side of the structure, which is awash with skips and portacabins.

Outside the entrance lurks a Bedouin tent with a carpet roof, potted palms and a mass of undisturbed cushions. I quell the urge to throw myself on them by entering the exhibition.

A bag check worthy of Heathrow at its post-11 September tightest leads me to a deceptively large space. The first display of Greek, Roman and Islamic stone mosaics, statues and other artefacts is fascinating. The antiquities hail from long-forgotten historical periods such as the Carthaginian and Ptolemaic.

The sudden juxtaposition of these with the exhibition’s other attraction, contemporary Libyan art, is a bit unsettling. Some of the work, particularly that inspired by the desert, is stunning. Other more political work, such as that of Saif El-Islam Gaddafi, a qualified architect, is less so. With no-nonsense titles such as ‘War’ and ‘The Intifada’, it smacks of A-level coursework: worthy, but with his penchant for newspaper cuttings, it’s a touch simplistic.

A two-minute stroll past picnicking students leads me to Toyo Ito’s breathtaking pavilion for the Serpentine Gallery. Ito joined forces with Ove Arup’s Cecil Balmond to create the structure – a web of white, angled steel girders with open sides and glass panels.

The odd shard of grass on the floor brings a touch of the outside within, which seems to be whole point of the pavilion: it is neither indoor nor outdoor, but a magnificently airy shelter from rain and, today, beating sun.

People are eating cakes and supping tea and coffee, and braver souls are reclining in Ross Lovegrove’s grey, Styrofoam chairs dotted around the edge. Pushchairs jostle for space between the lime green and white cafÃ©-style chairs and tables.

The structure is based on a mathematical algorithm and is as impressive close-up as from afar, particularly as it sits on a lawn metres from the Serpentine Gallery, a 1930s former tea house. The contrast couldn’t be greater. Despite the jutting angles of Ito’s work, however, it doesn’t look overly modern, softened by the permanent Serpentine gallery nearby and its sunny, leafy setting. If it were situated outside, say, the Louvre in Paris, it would look completely different.

Ito’s pavilion follows those by Zaha Hadid and Daniel Libeskind in 2000 and 2001 respectively, and will hopefully become an annual fixture. The Libyan art and antiquities moves to Vienna, Berne, Rome, Tokyo and Cairo after London. Both are free, outdoor and a highly recommended diversion for a few hours.

Pavilion 2002 – Toyo Ito with Arup, is open until 29 September at the Serpentine Gallery, London W2.

The Desert is not Silent – Libyan Art and Antiquities runs until 10 August in the Albert Memorial Gardens, London W2