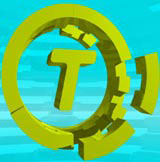 For video jukebox The Box, part of Emap Performance TV, the consultancy has updated visual elements originally designed by BamberForsyth Fitch, as part of the channel’s rebrand last year (DW 24 May 2001).

Robot’s work, due to be aired in the middle of this month, includes a ‘call to action’ sequence, ‘zone bumpers’ and other elements, says creative director Phil Man.

It features a set of three anthropomorphised cuboid characters, each containing a letter of the channel, which Robot has injected with more personality, inspired by the physical comedy of The Marx brothers and the Three Stooges, says Man.

‘[There is] one straight guy, a goofy guy and an over-excitable, but basically stupid guy’, he adds.

The consultancy produced 55 minutes-worth of three-second idents, which draw on graffiti styling to ‘break up and fracture’ Trouble’s encircled ‘T’ identity, says Man.

Trouble TV is aimed at 13-to 19-year-olds and it was important not to alienate any viewers with the design work, says Trouble creative director Kerry Taylor. ‘Acidic’ greens and oranges have been used to create a ‘Manga-retro’ feel, she adds.

For both jobs, Robot was approached without a pitch on the basis of its experience working with 3D information.

Same message goes out to both new and experienced