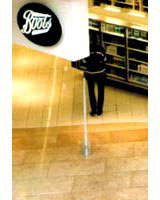 Boots the Chemist is pulling the plug on its men’s grooming salons, following last year’s launch of two pilot stores, and is rolling out unisex health and beauty concepts instead.

A Boots spokesman says there are no plans to launch any further standalone or in-store male grooming projects, following trials in Bristol and Edinburgh (DW 25 August 2000). A roll out of the health and beauty services has become the main focus.

“Despite the boom in male grooming, we are concentrating on the wider strategy of unisex health and beauty outlets.

“The demand for services such as laser hair removal is high, so we are trying to find the right consumer mix. Boots’ customer heartland is women,” he says.

One outlet is opening in Manchester in spring/summer 2001. The other two are scheduled to open at the same time. Boots refuses to disclose locations.

A Boots spokesman says the design teams involved in the Milton Keynes and Kensington stores, Fern Green Partnership and Era, are working on concepts.

Fern Green partner David Fern says it is working on Boots’ dental, homeopathic and optical, all part of the unisex concept.

Era director Christine Harvey says the group is working with Boots but declines to give details.

Open Up if you’re involved in direct mail design

Here’s the full story on the Aero acquisition