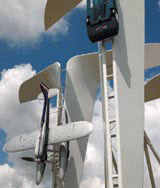 Screen branding group Lambie-Nairn has won the contract to rebrand The Weather Channel Companies in the US, for the first time since its inception in 1982.

The branding project will include redesigning print and screen identities for use across all media, including the creation of an idents sequence for broadcast.

The Weather Channel claims to be the most watched weather information provider in the US, reaching 105 million viewers.

Lambie-Nairn won the work to review the channel’s identity – which it will tackle from both strategic and creative perspectives, following a paid competitive pitch against undisclosed design consultancies. It was, however, the only group from outside the US that made it on to the final shortlist of four.

‘This is a huge project with a significant fee,’ explains Lambie- Nairn new business development director Guy Hewitt. ‘We are aiming to create a more emotional connection with the viewer that is visually more entertainment-focused, prompting them to tune in and stay longer.’

The project is set to launch in Spring 2005, and the contract extends to the creation of a back-up advertising campaign.

Tundra gets delicatessen logo design down to a T