Pentagram partner Abbott Miller has creatively directed the album cover for Future Utopia’s conceptual album which has a “neo-psychedelic vibe”.

Future Utopia is a new project from Grammy award-winning producer and musician Fraser T Smith, who has previously worked with the likes of Adele and Britney Spears. The conceptual album, entitled 12 Questions, brings together a wide range of artists including Stormzy, Idris Elba, Es Devlin, Alysia Harris and Mikky Ekko over 12 songs. 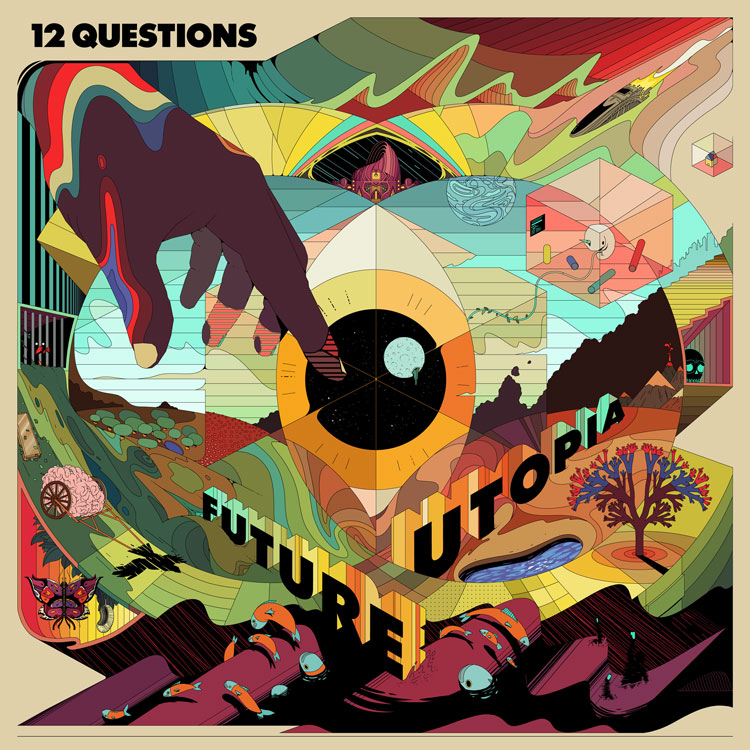 Each song on the 12-track album is “framed as an inquiry” and has its own visual section, which come together as a whole for the album cover. Miller worked with Tel Aviv-based illustrated Ori Toor to create the album cover and its accompanying campaign. The illustrations were then animated by LA-based studio 1983. Miller, who is based in Pentagram’s New York office, has also designed a double LP that will be available in the autumn.

Miller tells Design Week that the project’s “very compressed” timeline meant that the development was “very focused”. Three “basic directions” were considered, he says, including a series of symbols, a photographic montage and illustration.

It was the third way that was more suited to the project, as it presented Utopia as a “conceptual territory”. Photography led to a “darker” and “more literal documentary mode” while illustration “maintained a sense of hope”, he explains.

The designer adds: “It allowed us to illustrate these big themes — greed, power, technology, environmental crisis, social justice — but to balance the darkness with a sense of optimism.”

Creating a world that “an audience can enter into”

The goal for the interconnected cover was to create a world that “an audience can enter into visually, that approximates the sonic world Fraser created”. Some of the inspirations for this “hybrid” project — which covers soul, rap, spoken word and “art rock” — were Mati Klarwein’s artwork for Miles Davis’s Bitches Brew, Roger Dean’s work for English rock band Yes and Martin Sharp’s work for Cream.

The separate sections have been designed to contain “Easter eggs” — visual clues that reference details of the individual songs. The first single Do We Really Care? contains a lyric about a cannonball in the water. In the track, poet Simon Armitage says: “I sense some creature not far from the surface, cold-blooded, imperious, with a heart like a cannonball lost in an ocean trench.”

In the section for the song, there is an illustration of a cannonball tucked away between jumping fish. “We mapped out all the visual references in the lyrics and identified the potential iconography,” Miller explains, with the team looking out for “wonderful mental images”.

Smith is interested in the mandorla — a pointed oval that features in medieval art and architecture — and many of the cover designs that were developed used this shape as an “organising element”. The almond shape takes centre stage in the cover in the form of an eye. This formation worked well with the “lovely linear elements” of Toor’s illustration, along with Miller’s lettering for each of the tracks, which brings the song names into the landscape.

Miller says that it is Toor’s “interesting sense of motion” that made him such a good match for the project. “There is an inherent sense of flow in his work,” the designer adds, which helps to create “little episodes and incidents” like a Hieronymus Bosch painting. Bosch, a Dutch Renaissance painter, was famed for his fantastical landscapes which explore religious concepts and stories.

Toor tells Design Week about the collaborative process, highlighting the freedom he was given. After being sent lyrics, thoughts from Smith, the record label and Miller, he then listened to the album for the first time. “After soaking all of the inspiration, I pretty much got free rein to create,” he says. “Diving head first, I started drawing the final piece, sending work-in-progress to the team and implementing their notes as a I went along.”

Describing the process as “organic” and “fun”, Toor says he was primarily inspired by the album’s content — the lyrics, spoken word sections and music — as well as “prog rock” album covers from the 1970s and 80s. “I’m really into this warm, timeless nostalgia vibe,” he adds.

Of the interconnected cover, he says that his favourite might be the “lung trees” in the bottom left, which align with the song What’s In A Name, featuring British band Bastille. “But the more I think it,” Toor says, “the harder it gets to choose a section.”