Eurovision has unveiled a virtual village which will be open to international visitors in the week of the competition’s final stages later this month.

The online village has been designed by digital agency Dept, events group Tribe and Rotterdam Festivals.

The 3D world presents a virtual version of Rotterdam and will be free to access through web browsers. The Netherlands was due to host the singing contest last year before it was cancelled because of the pandemic.

It is the first time the contest has created a virtual version of the Eurovision village, which usually welcomes thousands of fans each year in the week running up to the final. In 2019, an almost 30-acre park was opened in Tel Aviv, Israel for the competition. 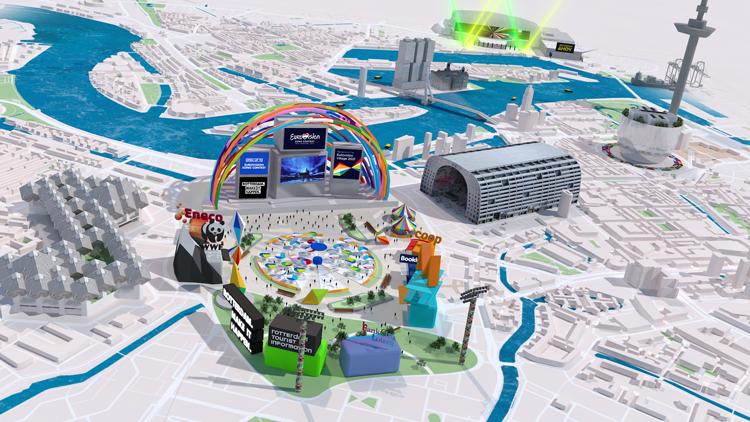 According to Dept creative director Max Pinas, the experience had to work alongside a number of potential outcomes. “We had to come up with something that would work if everybody comes, half of them come or nobody comes,” he says. While the competition is taking place this year, details about the proceedings have been limited.

Every year around 20,000 people descend upon the host city, Pinas explains, so the aim was to create an experience for those Eurovision fans who could not come this year. From there, the ambition grew “to open it up to the world”, he says.

The team has come up with an online platform that aims to evoke Rotterdam and “combine it with the vibe of Eurovision”, Pinas says. Eurovision has “strong branding”, he adds. The Rotterdam identity was designed by Dutch studio Clever Franke as a way to honour all the participating nations.

One of the challenges was to combine Eurovision’s aesthetic with the city’s look, according to Pinas. “Eurovision is all shiny, with dark and lights and flag waving, but that’s now what a city looks like,” he says.

During an early development stage, a more abstract environment was designed, with a few landmark buildings, but this didn’t give enough of a look and feel for the city, explains Pinas.

After finding a way to convert data into buildings using open source software, Pinas recreated the architecture in a virtual world. “Suddenly we were looking at Rotterdam in 3D,” he says.

The team worked from these detailed visuals and created hand-drawn versions so that the platform was more user-friendly and could be loaded more quickly, he explains. “The complex buildings suddenly became simple objects,” Pinas says.

Using this framework, the studio chose to showcase some key locations such as the main events venue and played with the scale of certain buildings. “It now looks like a normal city with a festival in it,” he says. In an attempt maintain authenticity to the city, a 3D designer from Rotterdam was part of the team, according to Pinas.

Users will be able to see an aerial view of the online village and then swoop down to areas which gives a sense of “immersiveness”, Pinas adds. “You feel like you’re actually in the city rather than just looking at GoogleMaps,” he says.

What can people expect at the online village? 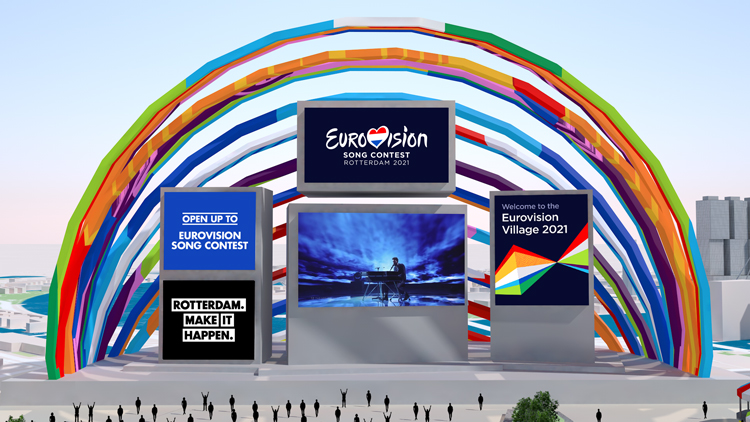 There are three main features of the village. The first is the main stage, which has been billed ‘the tower of power’ by Dept and has a live feed of all the performances. This includes a mixture of planned performances as well as surprise ones.

Some of the guests include singer Johnny Logan (the only act to have won Eurovision twice), Dutch DJ Afrojack and artists from the junior version of the song contest.

There are seven landmark buildings throughout, which include the Euromast (an observation town built in the 1950s) and the city’s Erasmus Bridge.

People will be able to “fly” to these locations to view additional information and videos, Pinas adds. If something is being broadcast live at these areas, an indicator will pop up with more details.

Throughout the virtual city, there will also be several points of interest which include notable people. These will showcase the diversity of the city, according to Pinas. For example, visitors will be able to hear Rotterdam’s mayor Ahmed Aboutaleb tell a specially-recorded story for the event.

Another point of interest is a ‘rainbow zebra’ which will celebrate the city’s Pride movement. “A lot will be around Pride and diversity because the theme for Rotterdam is about opening up for everybody,” he says. There will also be a social element, with a ‘social wall’ dedicated to conversations taking place on social media.

“There’s a form of serendipity,” Pinas says of the virtual world. “You can zoom in and out of the map, like you would when you get out of a train station and you just walk into the city and explore.”

The online village will be open from 15-23 May and can be viewed the Eurovision village website.