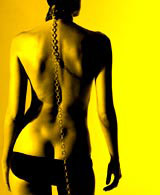 Sex sells. Look at recent ad campaigns from FCUK, to Kookai’s lawn mower, and back to the original HÃ¤agen Dazs images. Or look at Ann Summers’ statistics: a turnover of £53.5m and rising. And with its new Soho brand and aggressive expansion plans for the existing chain, the group is looking to sell more sex than ever.

Ann Summers is in a class, or at least a sector of its own. Part lingerie, part gadgetry, the shops cater to the needs of hen parties and women in general around the country. Harder hitting than Agent Provocateur, but less hard core than the Harmony chain, they don’t need a sex shop licence, and they are growing fast – 15 outlets opened last year, and now they are appearing at the rate of one a week.

The whole retail side of the business is going through some major changes. The 33-strong Knickerbox chain was bought out of receivership and added to the Ann Summers portfolio in April. The chain relaunches on 1 October, although new products will not appear on shelf for another season. The revamp will be gradual, says Rebecca Franklin, head of brand marketing at Ann Summers. “People still want Knickerbox, but we’ll make it more cutting edge,” she says. The four central London Ann Summers outlets are to be turned into Soho stores, and if successful, there are plans to take that brand further afield, even to Milan and New York. The remaining Ann Summers stores, known as the High Street chain, will themselves be revamped, following BDG McColl’s research into the market. A consultancy is yet to be appointed to the design job.

“Ann Summers has affected quite a remarkable transformation, from sex shop to risquÃ© lingerie shop,” says Retail Intelligence’s Clive Vaughan of the High Street stores. And because it has become more mainstream, it is now finding its way into shopping centres, he says. This part of the business competes to some extent with Marks & Spencer and La Senza, and there may be another rival from across the pond. “Everyone’s been waiting for [racy lingerie chain] Victoria’s Secret. It has a huge following in the US and could have a major impact, meeting Ann Summers from the other direction,” says Vaughan.

But it is only in recent years that the lingerie sector has done so well. “In the mid-1990s, the buoyancy of the market led to a belief that there could be a much bigger role for specialist lingerie chains,” according to Mintel’s Consumer Goods report of October 1999. Growth was expected from Knickerbox; the UK lingerie chain Contessa changed hands twice, and La Senza arrived from Canada. “However, the share of the market held by specialist chains remained small,” the report adds, with La Senza being sold in 1998 for a nominal sum to the owners of Contessa.

However, prospects are more than buoyant for Ann Summers at the moment, and the group’s new emphasis on design and brand strategy has led to a spate of internal appointments. In April, David Munro was brought in from BHS as retail design executive. His job is to reposition Ann Summers as a high street retailer, rather than a party plan organisation. At the moment, retail sales only account for 30 per cent of overall sales. Munro’s job is to “bring a bit of theatre to the stores”, as he says. He also presides over the five-strong in-house design team, and will watch over the relaunch of Knickerbox, which is to kick off with a new ad campaign by Team Saatchi. Another recent appointment is Sharon O’Shae as design manager. Franklin took the brand marketing position last August, and started the process of introducing the Soho brand in October 1999.

But why invest in a new format when the existing brand is so well known? “London customers demand a London experience,” says Franklin. As these London customers are more likely to be men, there was an opportunity to create a different offer from the women-oriented high street stores. Women now account for 70 per cent of retail sales, so the other half of the population is an untapped market.

But Franklin doesn’t want to alienate existing Ann Summers customers with Soho. She hopes customer split will be 50/50 men and women, aged between 20 and 40, including couples. Rather than a demographic profile, Franklin describes the audience as “very confident and interested in sex; people who live and work and go out in the area”.

So as the High Street Ann Summers’ brand proliferates as a mainstream chain, there is an opportunity to introduce something a bit different through Soho. “We want to be a controversial brand,” says Franklin.

Indeed, the existing Ann Summers shop is a world away from Soho. The old-style Charing Cross Road store still sports the familiar turquoise colour scheme, pale wood flooring, an emphasis on wall displays, topped off with a swirly red italic logo and bitten apple symbol. As a format it looks tired and uninviting.

Soho, on the other hand, is altogether more “street”, as interior designer Jonathan Silver explains, and Silver & Co has certainly gone to town on the concept. Before you are even inside the shop, there are visual cues preparing you for its tongue-in-cheek style. The metal rings attached to the store front offer customers several positions in which to tie up their partner, should they wish to shop alone. The long vertical door handles supposedly allude to the male and female forms. With its slate units, stone chipping flooring and concrete, Silver has created a more masculine environment.

And as sex sells, it makes sense to put the products in an environment which can take a mark-up. “We’ve tried to make the front half [of the store] “chichi”, to raise the perception of the value of the merchandise,” Silver adds.

This is also reflected in the style of display images in the underwear section. No longer the pneumatic glamour models, but duotone poses of a trim brunette with shoulder-length hair, shot by Steve Perry. “We were after a more upmarket, avant-garde feel,” says Stuart Grunsell, creative director of MHG. The consultancy designed the branding, packaging and graphics. “We didn’t want a cheap, busty, Loaded look, but more a Vogue look,” he adds. MHG is using Perry’s shots on the packaging, colour-coding products as they go.

While the name Soho may not inspire locals, it was chosen for its global recognition, and sets the tone for the mostly male target market.

“It is quite cutting edge,” says Franklin, “It sums up what we’re doing without spelling it out.” There was a debate about keeping the name Ann Summers [which, according to Franklin, enjoys 100 per cent recognition], and it now acts as an endorsement to the Soho brand.

Thankfully, there was no such sentimentalism surrounding the apple emblem, which Franklin admits, was out-dated. Who needs a forbidden fruit when nothing is now off limits? “Sex has changed – it’s become completely mainstream and is no longer risquÃ©,” she says. The apple will also get the axe in the refurbishment of the “high street” shops, when a new identity is introduced.

In lieu of the fruit, MHG has introduced a flower as a graphic symbol or emblem. The slipper orchid was chosen, “to give the idea of sex”, says Grunsell, and is depicted poster size behind the counter. The image was coloured “to make it look fleshy and almost meat like”, he adds.

This complements Silver’s liberal use of aubergine coloured leather for a presentation bowl full of condoms by the till, and the padded poles displaying handcuffs. Needless-to-say, all the furniture and units are bespoke, including a portcullis contraption which hangs over the bondage area, and the thick latex light fittings, designed to resemble condoms.

There is also a change in direction for the products. Nicole Farhi is designing a pair of pants which will be on sale in October to coincide with the breast cancer campaign. Made of rough silk, they will be in French navy with a pink ribbon. “We want to work with high profile fashion designers,” says Franklin, citing John Galliano and Alexander McQueen.

“Using designers makes sense,” says Vaughan, pointing out that M&S has brought in Agent Provocateur. M&S, he says, has been talking about opening lingerie-only stores in Europe, another competitor for Soho if continental expansion plans are realised.

A designer approach also fits in with the way women’s perception of lingerie has changed. Women now “think in terms of a lingerie wardrobe, with different styles for different occasions”, says Mintel. The Consumer Goods report says these styles fall into everyday comfort, the sporty look, and occasion glamour.

It is the third category that is catered for, unsurprisingly, at Soho; Munro describes the format as “raunchy but sophisticated. It’s about taking it one step beyond people’s expectations.” This is achieved through a strong vision and a bit of nudging and winking on the part of the design. “We get away with as much as we do with humour,” says Franklin.

1972 Brothers David and Ralph Gold, founders of Gold Group International, acquire Ann Summers in Bristol. That year, the first store opens in London’s Marble Arch. The plan now is to have a store in every UK town.

1981 David’s daughter Jacqueline introduces the party plan concept. There are now 7500 women organising parties, with around 3500 parties being held a week. Average sales per party is £192.

Retail accounts for 30 per cent of Ann Summers sales.

70 per cent of Ann Summers retail sales are made by women.

Interior revamp: yet to be appointed

BV Group is an Alternative Investment