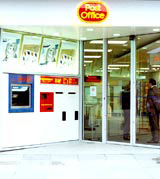 The Post Office has undergone a series of changes both to its corporate identity and retail formats during the past decade. But Marketplace Design’s appointment as the Post Office’s brand consultant is the latest step in the organisation’s attempt to modernise, change how people perceive it, and reach a wider audience within the UK.

The Post Office, which generates annual revenues of £7bn, was previously responsible solely for the national network of post offices, but has seen rapid growth in recent years and now incorporates Network Banking and Cash Handling and Distribution.

It is looking to build on its core services – mail, parcels and counter transactions – and expand into new markets such as logistics and contract distribution, electronic services and the provision of high street services for banks. As part of this over-riding ambition to become a “complete distribution company with global reach”, it is developing a growing international presence, strengthened through overseas acquisitions such as that of German Parcel in 1998.

Marketplace’s appointment, following a six-way pitch, is a realisation of the need to develop the Post Office’s capabilities and profile, and make people more aware of its services, says Post Office head of marketing Deborah Maxwell. The design group’s areas of responsibility include retail formats, visual language, internal documentation for staff and the Internet. Hyperlink is also working on several aspects of the company’s website.

“The Post Office brand has considerable latent power which we intend to capitalise upon to the benefit of all our customers and staff,” says Maxwell.

“We wanted to have one consultancy reviewing the Post Office brand and Marketplace impressed us with a clear understanding of where we are now and, more importantly, where we want to be in the future,” she adds.

“It’s not a total change of the brand, but a repositioning in order to take it across more areas such as the Internet and telesales. It will be a multi-channel approach to make people aware that there are other ways of contacting the Post Office.”

The Oxfordshire design group’s lead consultant to the Post Office, Ashley Goodall, describes the project as an “intellectual” one. “The challenge to realise the power and value of the Post Office brand will be instrumental in helping the Post Office deliver the important initiatives that it plans for the future,” he says.

“There is lots of value that has not been explored, but has been taken for granted. The aim of the project is to clarify in everyone’s minds what the brand stands for. It will lead to new opportunities and will be seen as both a business as well as a consumer brand. It will also instill confidence in the company and be used as a strong business tool for employees.”

Although there will be no branch redesign this year, Marketplace will be revamping retail concepts for the Post Office’s 18 500 nationwide outlets in an effort to “declutter” them, says Maxwell.

“Over the next five years there will be some major changes in retail formats. We’ll be taking the Tesco route by making them clearer for our customers; something like Post Office Metro or Post Office Express. It will create more distinction by using descriptions like Post Office local or rural. It depends on what each branch has to offer,” she adds.

There are no plans to redesign the Post Office’s corporate identity, but the lozenge-shaped logo, designed by the then Sampson Tyrell in 1994, may be made more animated for use on the Internet. “We will be breathing values and life into the logo as part of the brand realisation,” says Goodall.

“It will go beyond the branch,” adds Maxwell. “When people see the lozenge they won’t just think of a physical building on the high street, they’ll think of the Web and telesales, too.”

Next month, a publication addressing the organisation’s 200 000 staff will be distributed. “We are in the process of articulating a tool for staff internally so they understand the aspirations and behaviour of the Post Office in the future,” says Goodall. “We are also creating a brand document and visual language for the way in which the Post Office communicates in advertising, design and environments – it’s quite a holistic view.”

Goodall believes the growing independence of the organisation and its move away from the clutches of the Government will provide a host of new opportunities, hitherto prevented by extensive regulation across the sector.

“It is coming into a much more autonomous existence which gives it the confidence to work more independently. The brand is a tool and vehicle to which a lot of this will be communicated,” he explains.

Richard Hyman, chairman of retail analyst Verdict, says the appointment of a branding consultant could be a positive move, but warns that the Post Office’s current “state of flux” must be addressed in order for it to be successful in the future.

“The Post Office is going to play a different role in the future – it is no longer sufficient for it to be commercially viable.

“It must look at new ways to go forward and justify its existence and has got to provide people with a service they need and value, otherwise [business] will get increasingly tough,” he adds.

1999- revamp of retail format by Marketplace