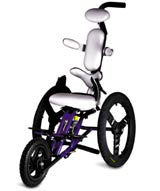 Michael Farmer is a lucky man. He admits he has an excellent job as the Audi Design Foundation manager. His obvious enthusiasm for running up and down the country, scouring innovative student product projects is revealed in a constant stream of anecdotes and joyful recounting of the technical minutiae of each idea.

Established in 1997, the Audi Design Foundation is a charity that provides grants to help young individuals, groups or organisations operating in the field of design to develop their ideas into working prototypes. As a charity, it receives financial support from Audi UK, who from 2002 will donate 5 for every car sold annually. (This does not include 1.50 tax relief from the Government on each car sold.)

Although the relationship with Audi UK is close, the foundation is managed independently allowing its values an autonomy. Yet, it has struggled with an image problem for most of its brief existence. ‘To many we are an automotive charity,’ says Farmer. ‘But we are not. We are about valuing other people’s design.’ Hence the decision, from 1 January, to change its name from Audi Foundation to Audi Design Foundation with a new logo designed by BBH.

Another major problem the foundation has been facing is that of being perceived by the universities as a traditional source of funds rather than a foundation to work with proactively. ‘We had to invest a lot of time in building contact with the tutors of the design colleges,’ says Farmer. ‘We wrote numerous letters to the dean’s of faculties, but the information didn’t go down at all well, and for us the first year was very bad.’

Things have picked up recently, however, with the arrival of Jenny Cook on Farmer’s team. Cook, who has a background in education at the Open University, has worked hard to create a network of 35-40 universities, talking directly to tutors and heads of courses who have a daily relationship with their students. ‘That helps us to identify students who are a bit special,’ says Farmer. ‘It’s not necessarily about brilliant, academic students, we are looking for those who will make it [the project] happen.’ Special relationships have so far been established with Nottingham Trent University, the University of Northumbria in Newcastle and the Brunel University.

Targeting 18to 25-year-olds (although older people may apply), the foundation gives out grants on projects that should be completed during the student’s final year. The money helps the construction of a prototype fit for future production. Projects need to demonstrate innovation or new technology, be 3D, apply electronic or mechanical engineering and have a potential for commercial application or benefit to the community. The sum of grants vary from 300 to 12 000 and it covers purchases of materials, components and services.

From the beginning of this year, the foundation will have 250 000 available to give away. The Grants Panel, composed of three ordinary members from the seven board trustees, meets on demand so that no application has ever to wait more than six weeks to receive a reply. This year a former grant recipient, Jodie Chapman, has been appointed as a trustee to give a practical perspective.

‘We like to take risks, but we don’t want to throw money away,’ say Farmer of the judging process. The foundation is not involved in the manufacturing stage of the projects, although Farmer has been known to get involved if the grant receiver has problems with suppliers. ‘There is a limit to what we can do as registered charity,’ says Farmer. ‘As soon as it becomes of public interest we have to step out, but, of course, having the word Audi associated with the project is empowering for the student and it opens many doors.’ Within its remit, the foundation also advises all grant receivers to be informed about patenting and copyright laws.

So far, one foundation-supported project, the Moti Activ wheelchair, designed for children with cerebral palsy has gone into production, and two others are underway. The latest batch of grants, awarded last December, are 11 projects totalling approximately 28 000. They range from Fluid Furniture, made from a flat sheet of ‘memory material’ that can be moulded via heat in any shape desired, to ‘portable seat rows’ – a seating system that can be dismantled easily and transported as a case.

Passenger automotives don’t, Farmer stresses, appear on the grant list, although many prototypes such as the water bike and yet another wheelchair, designed to function without a carer, verge on the area of vehicle design. Although the foundation stays away from anything that is graphic design or fashion, it has recently awarded Ned Atkinson for a heating panel that also has a decorative function. For Farmer this could possibly be the beginning of funded projects that combine form with worthiness and function.

Career: Farmer has worked in the voluntary sector for th