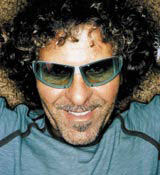 Renzo Rosso has just landed in the lobby of the Sanderson Hotel. He is clad in trademark dark Diesel denim, his deep tan offsetting ice blue eyes, the physical embodiment of his ironic, urbanware brand. He has just flown to London by private jet from Paris where he has overseen a board meeting for Martin Margiela, the fashion label of which he recently became a majority shareholder. There he also posed for a photo shoot with Karl Lagerfield, with whom he collaborates on a range of ‘skinny’ jeans, the Kaiser’s latest foray into fashion since he underwent a widely publicised, ferocious slimming programme.

For the Diesel owner and founder, this is a ‘normal’ day’s work – he’ll later join his team at the opening of his new flagship store on the King’s Road, then will be off to a star-studded dinner at Sketch (where the guests include Peter Saville and Anna Friel), and a party in Shepherds Bush Bingo Hall.

At 47, Rosso is a bundle of energy, happy to be celebrating his label’s 25th birthday. And so he should, since Diesel is a phenomenal international success story that turns over more than â‚¬680m (around £471m), 85 per cent of which is generated outside Italy. The headquarters are based in Molvena, in the north-eastern part of Italy, but there are also 15 subsidiaries across Europe, America and Asia.

Most of Diesel’s reputation comes from its youth culture credentials, no doubt aided by an army of trendspotters around the globe. But it is the brand’s design management structure that really makes it stand out in terms of business. Diesel’s fortunes can be largely credited to its 40-strong in-house team, a mix of fashion and industrial designers, stylists, art directors, graphic and new media designers that produce the whole label.

There are also interior designers and eight architects who are in charge of designing all the stores, like the 465m2 London site sensitively converted from an old pub. Retail wise, Diesel’s philosophy is to go against the uniform look and have an individual and relevant approach for each city. While there are currently ten Diesel flagship stores around the world, there are also different retail formats like the Diesel Concept store in Berlin and the Diesel Denim Gallery in New York and Tokyo.

Asked how he chooses his collaborators, Rosso replies that, ‘Passion is the main quality they need, the desire to believe in a mission. I find them in bars, in a club, in the street’. He says that since the 1980s he has been bringing ‘green-haired and pierced youths’ to Italy, to the predictable shock of the people of Molvena.

These days, he leaves a lot of the initial recruitment to his HR department which visits colleges, scans through CVs, and selects in accordance to the talents. But he still has a final say. ‘I look for people who can work in a team. I don’t want the star, I want the number two,’ he says.

While certain elements of the brand are farmed out – most notably the advertising campaigns by Dutch ad agency Kessels Kramer and the website by EHS Brann and Bloc – this ‘community’ arrangement (the team all lives in and around Molvena and meets at the beginning of each season to brainstorm at the ‘Villa’) seems to work wonders.

While the in-house team is a mix, hailed from diverse backgrounds and cultures (creative director Wilbert Das reckons the ratio is 70 per cent international talent), the product is 100 per cent manufactured in Italy.

In addition to the four lines, Diesel, Diesel Kids, DieselStyleLab and 55DSL, there are also a number of licensed products such as sunglasses, shoes, bags, watches and fragrances. In 2000, Rosso purchased Staff International, an Italian fashion manufacturing and distributing company that produces own-brand NewYorkIndustrie and licensed brands Vivienne Westwood, Dsquared and Martin Margiela, as well as DieselStyleLab.

But Rosso isn’t only concerned with collections. He is also a scout and a patron, organising a talent contest in Trieste, called It’s #2, where the winner gets to work at Diesel and design five items, and he supports digital arts with the Online Flash Film Festival, held last May in Barcelona. Diesel runs events like the Diesel U Music awards, whose website is designed by Design UK. He has forayed into publishing with the New York nightlife guide in partnership with the Little Black Book.

A formidable force of nature, Rosso knows how lucky he is. ‘Normally in fashion you are a superstar for about ten years and then that’s it. I still wake up every day with an urge to go to work.’

Credit should be due to all involved in design process