For Slowthai’s current Hell is Home tour, the British rapper brought a make-shift home to Brixton Academy with the help of designer and artist Lewis James.

Slowthai (real name Tyron Frampton) is on tour following the release of his second album Tyron last year. The sophomore record explores the rapper’s conflicting personality traits, and also touches on social issues – one song is dedicated to the NHS. 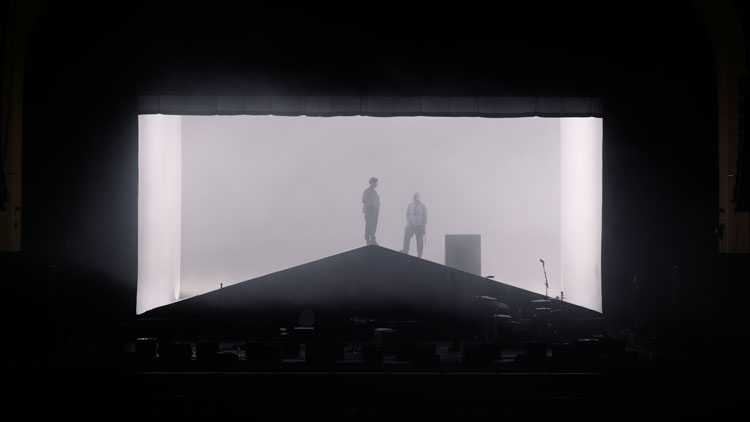 James, who has worked with acts like Post Malone and Griff, collaborated with Slowthai’s manager Lewis Rest on key concepts for the rooftop-inspired set design. “The show was to feel like a nightmare,” he says.

During the Brixton shows – which took place at the end of March – Slowthai performed on an abstracted rooftop, with a box built around him. The classic pitched roof house and chimney served as a metaphor for the “make-shift home” that Slowthai has built in his mind, James explains – a “symbolic shadow where all his thoughts live”. The surrounding box sought to evoke “a feeling of containment yet also a space of protection”, he adds. 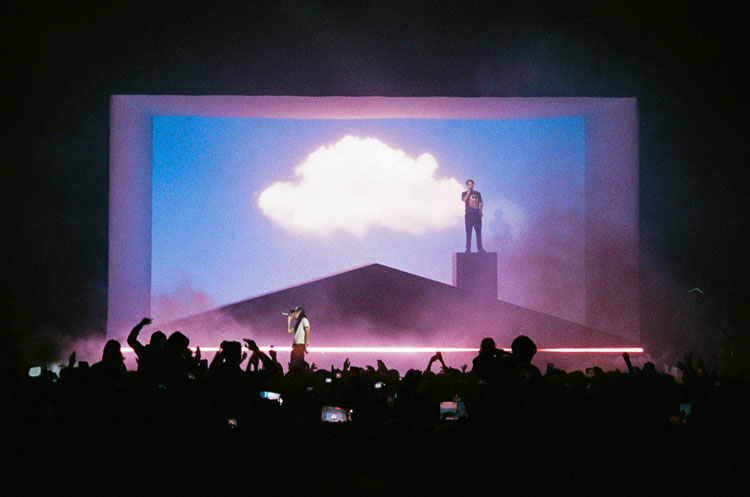 This framework allowed the creative team to explore the “feelings of the album”, according to James, alternating between “a space of pain, anxiety and anger but sometimes a place of love and bliss”. A screen was hung upstage onto which video footage was projected. When it wasn’t in use, it was hidden by an up-lit gauze.

“The stage’s large silhouette was designed to feel obtrusive, large enough for the house to feel like a home for the audience and a subtle reference to the title of the tour,” James says. “The dramatic angle of the set gives off a sense of sharpness that reflects the tone in the music.” 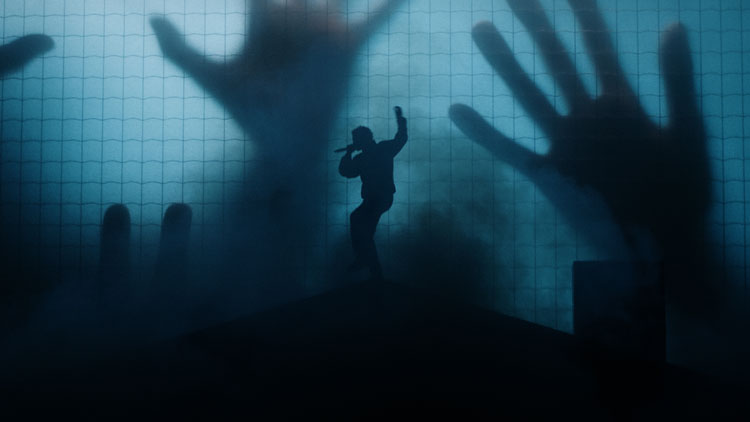 The team also worked with lighting designer Michael Straun on the set. The ambition was to “play delicately with light and create a pair of entirely different worlds for the set to live”, James says.

This helped the team bring to life one of the key references in early discussions: psychiatrist Carl Jung and the concept of an “inner shadow”. Much of the show was kept in silhouette, James says, adding that “it was important to keep this message blunt and strong throughout the performance, creating a window behind Slowthai that tells the story.”

“Peering through a giant letterbox to the audience” 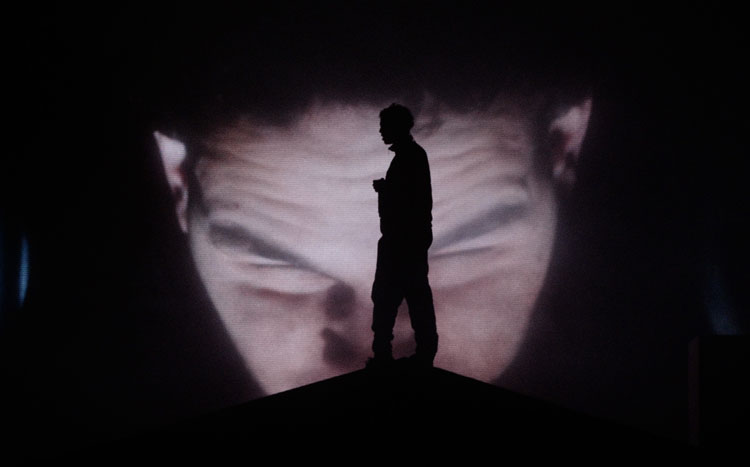 Thanks to the screen-hiding gauze, the team was able to surprise the audience throughout the show with the video. “It let us create these sporadic visions that seemed to appear and shift from nowhere,” James says.

The video footage was designed to reflect the thoughts inside Slowthai’s mind, Lewis explains, likening it to an “outside voice that peered through a giant letterbox to the audience”. The video footage was a collaboration between James, Rest and animation and video studio Uncanny (run by George Muncey and Elliot Elder). Footage was shot in Slowthai’s hometown Northampton before the show.

Using experimental lenses, they created up-close footage of Slowthai. During the performance, it appeared as though he was pressing his face up against the screen “as if trying to break out”, James says. “You’re able to see almost every detail on his skin.”

Other videos were inspired by idioms, the designer explains. For the video that accompanies Slowthai’s song Doorman, the team “used a medical throat camera to quite literally ‘jump down his throat’ on choruses”, James adds.

Uncanny paired the video with generative AI visuals, which created what James calls a “scenic roll” throughout the show. These included a shape-shifting drifting cloud, dream-like portraits of Slowthai and a storm gathering above the set.

How the set was installed 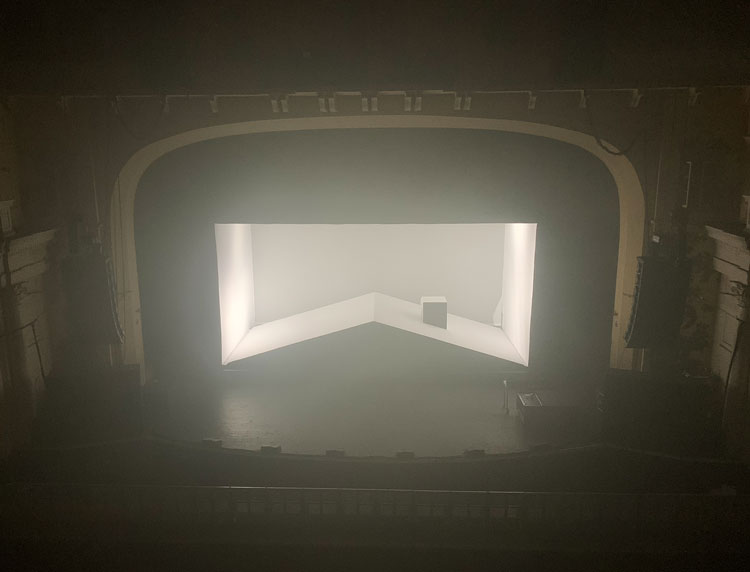 There were a few practical challenges when it came to putting the stage in place. Most of the stage is fabric, which meant that it all had to be checked thoroughly so that it aligned seamlessly, James explains. The pitch on the roof was also very steep, he points out. “I certainly found it a struggle to climb to the apex,” he says, “but Slowthai is one of those artists that can navigate a set like that naturally.”

The design was made with the Brixton stage in mind – “the Academy is such a beautiful venue with these Art Nouveau characteristics left behind from an era of shows that don’t exist anymore,” James says. The setting created some accidental but effective elements. “The light actually accidentally bled very subtly to illuminate the existing features of Brixton and helped to frame the design in negative space,” he adds. 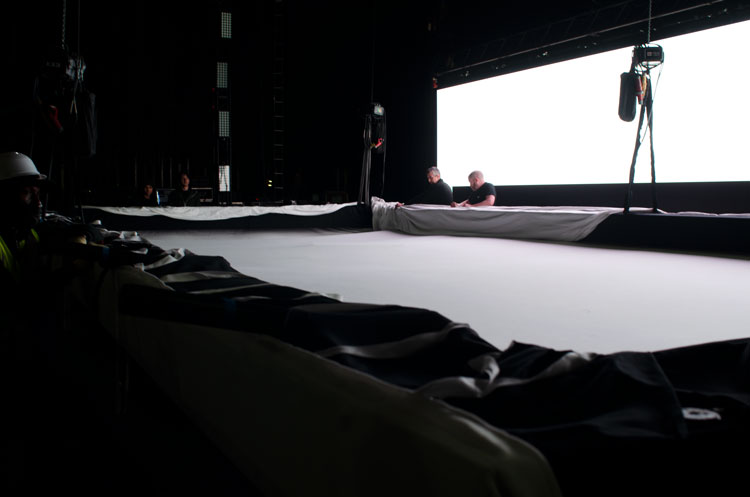 Slowthai’s tour has now moved to the States, and there are no immediate plans to reuse this particular stage (it might make a reappearance in the future, according to James). He adds: “With a show you are essentially not only designing the physical space that the show lives in, but also those 45, 60, 120 or however many minutes of time that the audience experiences every night, and after that – it all vanishes, only to live on in the form of photo and video.”